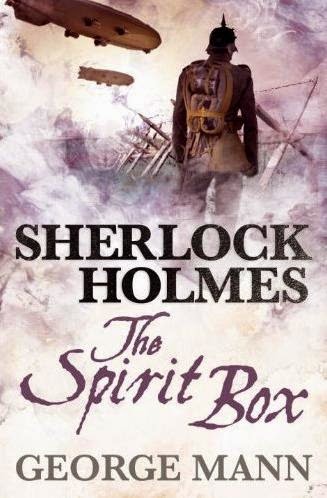 
Summer, 1915. As Zeppelins rain death upon the rooftops of London, eminent members of society begin to behave erratically: a Member of Parliament throws himself naked into the Thames after giving a pro-German speech to the House; a senior military advisor suggests surrender before feeding himself to a tiger at London Zoo; a famed suffragette suddenly renounces the women's liberation movement and throws herself under a train.

In desperation, an aged Mycroft Holmes sends to Sussex for the help of his brother, Sherlock.


As a massive fan of George Mann from his Doctor Who stories right through to his  Newbury and Hobbs steampunk novels, I know to expect a great story with superb pacing and a ton of twists and turns.  That's why he is a solid hand to choose to write a Sherlock Holmes novel.

As well as editing the two Sherlock Holmes anthologies that Titan Books put out recently, Mann also wrote a great addition to their Holmes library in the shape of The Will of the Dead.  That was a great and exciting adventure for the worlds most famous detective.  Would this follow up be as good?

Well, it's George Mann so we all know the answer to that already don't we?

The Spirit Box manages to be one of two things.  It feels like a story that wouldn't have been out of place in the Sir Arthur Conan Doyle era of Holmes but at the same time it feels like it has an eye to the future while staying true to the period.

One of the great things that Mann manages to do is not only stay true to the feel of the characters themselves but he also manages to put his own spin on them.  The idea of the aged and broken down Mycroft Holmes having to reach out to his brother Sherlock is written especially well.  There's the feeling of anger, jealousy but also one of a grudging respect between the two and Mann handles that side of the pairs relationship with aplomb and style.

The mystery itself is a great one.  It works so well because of the masterful pacing that George Mann employs.  At times it's got an exciting quick pace and the action comes thick and fast, really hooking the reader in to the mystery and intrigue.  At other times the pace slows down to really show the characters growth, especially when trying to piece the puzzle together.

If you are a George Mann fan or a Sherlock Holmes fan then this is definitely a book for you.  The pacing and the mystery work brilliantly well together as well as Mann's portrayal of some legendary characters from literature.  Kick back, put your feet up and be prepared to get sucked in to a good old fashioned twist and turn filled mystery.