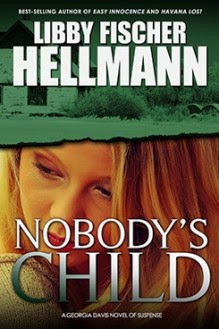 Published By
The Red Herrings Press


A bloodstained note left for Chicago PI Georgia Davis reveals the shocking existence of a half-sister she never knew about. That sister, Savannah, is pregnant and begging for Georgia’s help. Determined to track her down, Georgia finds herself heading deep into the dangerous underworld of Chicago’s illegal sex trafficking business. She soon discovers that trafficking is just a small part of the horrifying and deadly situation in which her new sister is caught up. Even worse, as Georgia tries to extricate Savannah, she comes up against an old enemy determined to make sure neither woman will escape alive. In the fourth novel of the Georgia Davis series, she faces her toughest challenge yet—and one she might not survive.


After receiving an ARC of this novel in return for a fair review, I must admit that I was excited to get to read someone that I had heard would rival my favorite crime authors such as Patricia Cornwell and Kathy Reichs.  Could someone possibly live up to those very well respected names?

While the story may be familiar to fans of crime fiction, Hellmann does something very good with it.  She takes a familiar storyline and makes it seem so completely fresh, new and most importantly, exciting.

With this being the fourth in the PI Georgia Davis series, I was worried that new readers to the series would be lost or even confused but that's definitely not the case.  It feels like a completely standalone novel yet at the same time, there are some great twists and turns that will reward long time readers of the series itself.  That's one of the main strengths of the novel itself because the twists and turns that we are treated to here work so well that you aren't just sucked in to the case but you are also eager to see what will happen next.

One of the things that interested me the most were the characters here.  Hellmann has a reputation for writing well crafted and fully fleshed out characters that will stay with you long after the book has been closed and that's the case here.  Obviously the best of these is the PI Georgia Davis character, a character who isn't just the heroine of the case but feels utterly human.  Too often in the crime genre, you get a detective or another law related character they come across as perfect and that ruins any suspense that the story may have.  That's not the case here.  Davis is human, can make mistakes and there were many times where I was convinced that she wouldn't live to the end of the book.  I loved that feeling of not knowing what would happen and who it would happen to.

The other characters more than stand up to the strong main character and when the twists and turns start to come thick and fast, you learn so much about them that you can't wait to get to the next page to see what Hellmann was going to spring on us next.

All in all, if you are a fan of Kathy Reichs, Dawn Kopman Whidden, Christopher Smith or Patricia Cornwell then this is definitely a great book to pick up.  Pitch perfect pacing, twists and turns galore and incredibly hard hitting, this will grip you from the first to the last page.