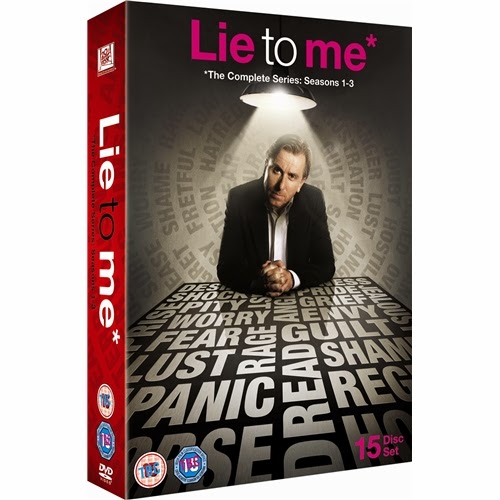 
Lie to Me is the compelling drama series inspired by the scientific discoveries of a real life psychologist who can read clues embedded in the human face, body and voice to expose the truth and lies in criminal investigations. Dr. Cal Lightman (Tim Roth) is the world's leading deception expert.

By analysing facial expressions and involuntary body language, he can read feelings ranging from hidden resentment to sexual attraction to jealousy. His work gives him the knowledge and skill set to expertly mislead others as well as detect lies. But as Lightman well knows, his scientific ability is both a blessing and a curse in his personal life, where family and friends deceive each other as readily as criminals and strangers do.

Enjoy the complete collection of Lie to Me including all 3 seasons and featuring an all-star cast led by Tim Roth, Kelli Williams, Brendan Hines and Monica Raymund!


As a massive Tim Roth fan, I was quite surprised that this series passed me by.  That's when one balmy evening my wife and I were looking for something to watch and stumbled on this one while flicking through some of the choices on the Netflix service.

That's when we started watching the series and we were hooked straight in.

The first thing I noticed was the simple fact that the series had a hell of a lot riding on it considering the massively impressive cast that assembled to bring the stories to life.  A lot of that credit needs to go to the always brilliant Tim Roth as Cal Lightman, a man that really should take some lessons on how to deal and cope with people in general.  He definitely is the star of the show, getting some of the funniest and most insightful lines but don't let that fool you in to thinking the rest of the cast are just window dressing.  They are far from it.  There are some amazingly touching performances, especially from Kelli Williams as Dr. Gillian Foster and the young Hayley McFarland as Cal's daughter Emily.

Stories wise, there are some really gripping stories throughout the three series.  Some are quite action packed, others quiet and reflective but all will keep you glued to the screen as you see the characters grow as the stories go on and you also see just how their rather unique skill sets start to take their toll on their lives and those around them.

The best way to describe this series to the unfamiliar would be to take a series like House M.D. and add crimes.  Yet while the parallels are there with that great series, Lie To Me manages to not only find it's own voice, it hooks in a whole new set of fans.  The way they would link the work they were doing with the facial expressions of some of the most famous and infamous people in the world is a really good way to link some of the scenes together.

All in all, this is a very good show and it's a real shame that once again, a show got cancelled before being allowed to come to a natural end and that is a real shame.  The cast do a superb job of bringing the stories to life and while it's not a perfect series, definitely in part to a character being built up for over half a series only to be never mentioned again, it's one that is well worth grabbing.