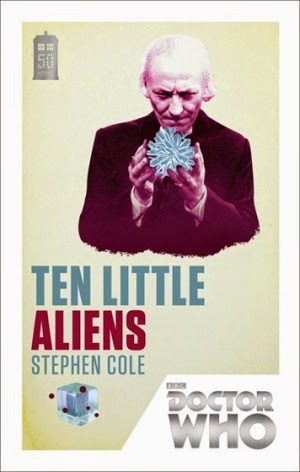 
Deep in the heart of a hollowed-out moon the First Doctor finds a chilling secret: ten alien corpses, frozen in time at the moment of their death.

They are the empire's most wanted terrorists, and their discovery could end a war devastating the galaxy.  But is the same force that killed them still lurking in the dark?  And are its plans for the people of Earth?


As a massive fan of both the classic era and the recent versions of Doctor Who I have to admit that when the 50th anniversary celebrations rolled around, I couldn't wait to get my hands on some of the newly reissued books.

This one featuring the First Doctor, was obviously first on my list as I've always had a bit of a soft spot for the grumpy old portrayal by William Hartnell.  Sometimes full of bravery to help the people of Earth and other times full of bitterness, it really was a breath of fresh air on the television screens at that time.

After reading quite a few novels featuring that portrayal, one thing has struck me.  It's quite a hit or miss portrayal to get right on the page and do Hartnell justice.  That's the case here to a slightly lesser degree than in some of the other novels.  For the most part, Cole does get the character right and creates a cynical and sometimes sardonic version of the Doctor but he feels a little bit out of place here because the style of the story just doesn't really seem like it is a Doctor Who story.

The story itself feels more like it should have been included in a William Dietz series or even as a story for the Warhammer crowd.  There are some superb twists, turns and surprises that run throughout the book, which makes it definitely readable as a science fiction novel.  It's true that this Doctor doesn't have the high energy of some of the other portrayals but that's the point of the character itself.  He's slow and deliberate in his actions and that is superbly put across here through Cole's writing.  The main problem is the fact the story itself just seems a little bit out of place with the characters involved.

That said, the pacing and the atmosphere of the tale is really well done.  There is a feeling of dread and sometimes even horror that flits between being at the forefront and other times running just below the surface and that really hooked me in.

Character wise, there are some well written and fleshed out people that populate the story.  There were a couple of characters that I thought would just be the sort of throwaway character that is there to make up the numbers but I then ended up caring about what would happen to them.

However, it's the portrayal of the First Doctor that is the best part of the story.  This story really did one of the better jobs of getting Hartnell right on the page and really explores the idea of a young and sprightly mind being trapped in an old body.  That really gave the story an emotional slant that would have otherwise have been missing from such a full on story.

All in all, while there are places where this doesn't feel like a Doctor Who story in the full sense but it is a very well written and exciting tale full of a twists and turns.  It not only gripped me all the way through but also did a really great job of doing the Hartnell era of The Doctor justice.