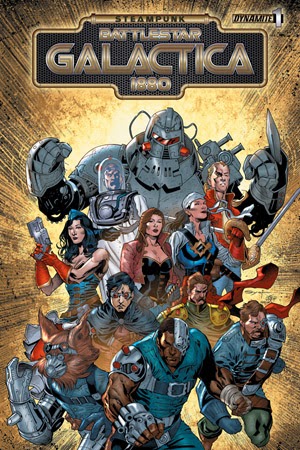 
Welcome to the world of Battlestar Galactica as never seen before, as #1 NYT Bestselling Author Tony Lee gives it a Steampunk spin! After Professor Baltar's clockwork Cylonics destroy the Colonial Empire, Arch Duke Adama learns that his son Apollo is missing!

It's up to Lady Athena to travel to the Sky Pirate world of the Rising Star and ask for help from the only hope she has - the disgraced Captain Starbuck and his humanoid / Daggit copilot Muffit...

For the last few years the Steampunk culture has been gaining a bit revival and that's show massively in books, movies and comic books.  There have been some amazing authors such as George Mann really showing that the sub culture is one that can feel exciting and fresh despite having its feet planted firmly in the past.

It was inevitable that someone would take a chance and put a Steampunk spin on a classic television series and in this case, it's Dynamite Entertainment that have taken the classic version of Battlestar Galactica and given it the Steampunk treatment.  When I read that they were going to take a shot at going this route with the series, I have to admit that I thought it would end up one of two ways.  It would either be an absolutely fantastic comic book mini series or it would be a complete mess.

That's when I saw who would be writing it.  Tony Lee.  The best selling author as well as the man who wrote a Battlestar Galactica prequel series for Dynamite Entertainment.

With that in mind, I went to the local comic shop and grabbed myself a copy of issue one to see just how it would pan out.  Would they do justice to characters that I have grown up watching?  Would the new spin on the popular show breath new life in to the stories?

I must say that the answer is a resounding yes from this fan.

The story written by Tony Lee starts, quite literally, with a bang and doesn't let up for one second.  The popular characters are all present here but the changes made to them to fit them in to the new vision of their world are largely successful.  My favorite being the changes made to Daggit that have to be seen.

The story of how Baltar wanted to come to power using his creations is given a superb new spin here by Lee and once again, the love he obviously has for the characters shows.  You're shown just enough to know who you are going to be seeing in the story and some great back story work, which has led me as a fan to eagerly await issue two with baited breath.  I'm not going to say much more about the story because I would love the Battlestar Galactica fans out there to catch this one themselves.

Art wise, Aneke has really done something amazing.  The characters have been given a makeover and look utterly brilliant.  The new looks given to such legendary characters as Adama, Apollo and Starbuck really work superbly well but wait til you see how Boomer looks in this one!

The settings are utterly fantastic.  They manage to not only have a classic feel to them but they also keep to the futuristic feeling that made the series so popular with science fiction fans not only in the 70's but now as well.  Aneke does a great job of including enough to make the long time fans happy while giving the tale a much needed and rather unique spin.

All in all, this is definitely one of Dynamite Entertainment's more unique television tie-in titles and it shows but in a good way.  I will admit that this rather different take on the popular show may not be to every fans taste but I personally loved it.