You're Next DVD Review 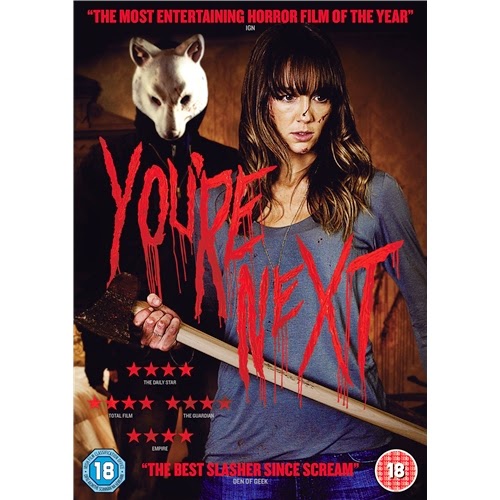 
A family reunion turns into a bloodbath in this home invasion horror thriller directed by Adam Wingard. After arriving at their idyllic country mansion, Paul and Aubrey Davison (Rob Moran and Barbara Crampton)'s family settle down for some rare quality time together. But just as they begin to relax and unwind, the family find themselves targeted by a group of deranged killers wearing animal masks.

As the desperate victims face a frenzied battle for survival, a family member's girlfriend, Erin (Sharni Vinson), ably demonstrates that she's more than capable of holding her own.


As a big horror fan I have to admit that sometimes when the genre finds a type of horror that hits the mark, they appear to run it in to the ground.  They did that with the found footage genre when The Blair Witch Project hit big and now they're doing that the home invasion genre.  We've had The Strangers and The Purge amongst others thus far and now we have You're Next but where does it stand in a steadily over crowding genre?

Well, I have to admit that I was entertained as hell by this one but it definitely wasn't a perfect movie by any means.

For a home invasion movie, this entry did bring quite a lot to the table by taking a darkly comic approach amidst all the guts and gore that are on display here.

Talking of guts and gore, there are some rather inventive deaths here and they don't shy away from showing them in all their bloody glory.  That said, the action and deaths here do lead in to one of the things that I didn't like about the movie.  Each time there's an action packed scene, Wingard tends to shake and move the camera to such a degree that it can be hard to work out what's happening to who sometimes.

Story wise, this one does actually separate itself from the other movies in the genre by doing two very important things.  The first one is that they actually give the murderers motivation for doing what they are doing to the family and that made a welcome change.  It may not have been the strongest reasoning ever or even the most inventive but at least there was a reason this time.  Another thing that I liked about the movie is that they also provided reasoning for how the survivor of the carnage survives instead of they just being lucky.

The fact that the writer here sidesteps some of the more over used cliches with a skill that really makes me want to check out some of his other movies.  One of the best moments of the movie for me is the simple fact that the murderers aren't put across as unstoppable killing machines.  Instead they are just people killing and are more than prone to making mistakes.  There's even a scene where one of the murderers has to stop to catch their breath.

Special features wise, it's a little bit disappointing that there isn't more here.  You have a rather dry and clinical commentary from the writer and director duo that while interesting from a technical standpoint, won't really be worth an extra use.  You also have a second one with both of them as well as Vinson and Crampton.  That ones a lot more interesting and well worth a listen.  The making of is a stereotypical promo making of but there are some interesting moments that give a good look behind the scenes.

All in all, while this one isn't perfect it is an entertaining and blood filled romp of a movie and I would even say it's one of the better installments in to the genre.

Posted by Pat Scattergood at 00:24