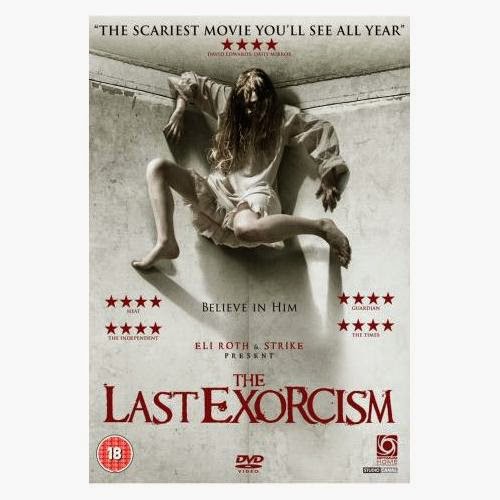 
Splat Packer Eli Roth presents a bone-chilling horror of demonic possession in the spirit of 'The Exorcist'. Shot in the fly-on-the-wall documentary style of 'Paranormal Activity', this spine-tingling tale of terror is the stuff of nightmares. The power of Christ compels you to buy this DVD!

From producer Eli Roth and visionary director Daniel Stamm comes a possession nightmare of epic proportions. Disillusioned by years of defrauding poor believers out of their hard-earned cash, evangelist preacher Cotton Marcus has decided to put the record straight by starring in a fly-on-the-wall documentary exposing the con tricks of his demon-busting trade.

A letter from a poor southern farmer begging for help in driving evil off his land seems to give Cotton the perfect opportunity to expose the phoniness of his satanic ministry. But then he meets the farmer's disturbed young daughter, Nell, and everything changes.

For the renegade priest fighting to lay his own demons to rest becomes locked in a merciless battle with Lucifer himself. Influenced as much by Linda Blair as Blair Witch, and filmed documentary style for ultimate you-are-there reality, this shocker is the most frightening depiction of an exorcism ever seen on screen.


I must admit that I'm not the biggest fan of the found footage genre.  For the most part they just come across as badly acted, lifeless and for the most part, even sometimes boring and painful to watch.  There are some exceptions to that rule.  You have The Blair Witch Project, Borderlands, Troll Hunter and the such but the ones that do shine amongst the over crowded genre are very good indeed.

I came across this one while scrolling through the glut of exorcism movies that seemed to come out so often a couple of years ago and for some reason, something about the synopsis grabbed me enough to want to sit and watch through it.

One of the things that struck me the most about this one is the simple fact that it managed to really get under my skin to such an extent that even with the couple of scenes where you could see just what was going to happen, you couldn't take your eyes off the screen despite the feeling of dread.  It was as if you knew you were going to see something unsettling but you couldn't look away.

A lot of that is thanks to the performances.  Instead of being over the top or even too deadpan, they come across as completely realistic as if you would be able to find yourself talking to them on your travels.  That to me, made the movie feel a lot creepier than some of the other found footage movies that I have seen recently.  Ashley Bell is absolutely brilliant as Nell and really does a superb job of being creepy and haunting yet being sympathetic at the same time.  I was transfixed by Patrick Fabian as well, who added a really subtle touch of class and pride to the role.

The feeling of dread and creepiness is really well done thanks  to the direction of Daniel Stamm.  I wasn't all that familiar with Stamm's work before this one but I'm now intrigued in to wanting to look up some more of his movies.

One of the things that annoyed me about some of the reviews of this movie is that there were complaints of shaking camera work and that a couple of scenes were a little blurry.  This is a found footage movie.  Those sorts of  things come with the territory.  I will admit that in some movies they do overdo that side of things but I really think they got the balance right on this one.  There were even parts of the movie that actually did feel like a documentary and not a found footage movie.

All through the movie the feeling of dread that was running under the surface really came to the forefront at the end.  A lot of people complained that the ending felt completely different to the rest of the movie but I don't think it was that bad.  They had built up the supernatural side of it in the final third so the ending came across as a going out with a bang, pardon the expression.  The ambiguous nature of it worked really well in my eyes because it left me to make up my own mind as to what happened.  That added to the uneasy feeling that had crept under my skin while I was watching the story unfold.

I honestly think that despite a couple of minor flaws and the fact that I'm not that big a fan of the found footage genre, this is definitely a horror movie well worth picking up.

Posted by Pat Scattergood at 05:20