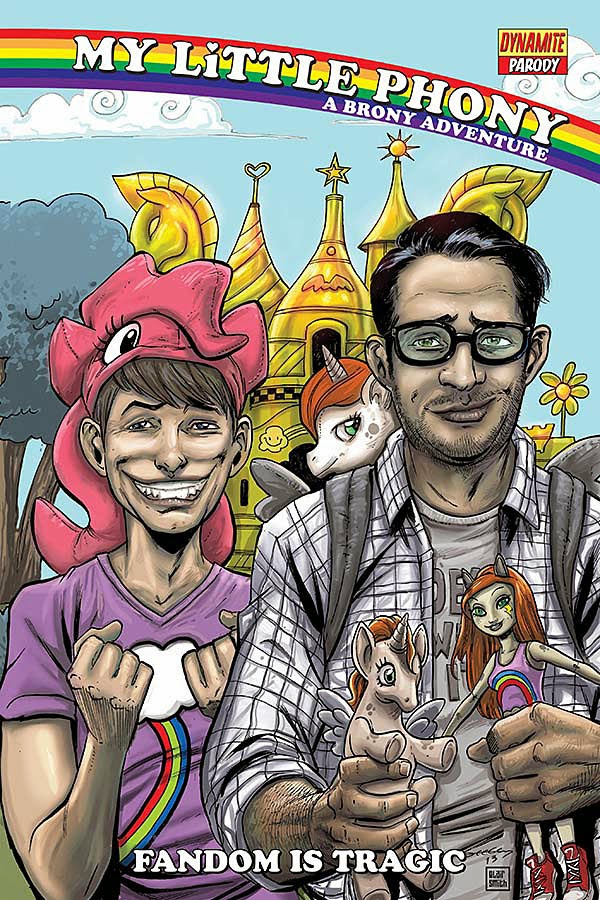 
Welcome to the world of the Horse-He, middle-aged men who share an unusual devotion to My Little Phoney.

Though the line of sparkley and adorable horses was made for young girls, nothing stops the Horse-Hes from adopting this lifestyle. When a dispute ignites over which clan of Horse-Hes are truest to the Horsey creator's original vision, the game of one-upmanship gets bizarre, and apocalyptic.

Now, the Horse-Hes must travel the barren wasteland to discover who the truest Horse-He is.


My Little Pony.  A television series loved and hated by people in equal measure it seems, especially with the new version currently doing the rounds.

When Dynamite Entertainment came out with My Little Phony: A Brony Adventure I'm not really sure what I was expecting to read.  I wanted it to be a bit of a satirical look on how different fandoms, of any kind, can sometimes take things a bit too far but is that what we ended up getting?

One of the things that struck me the most about this one shot is the simple fact that it doesn't come across as funny or satirical like a spoof should.  Nor does it come across as clever or cynical.  Instead it just seems incredibly mean spirited and even a bit dull.  To be honest, it kind of felt like watching one of the cool kids picking on one of the nerds or comic book nerd as I was often called while at school.  Hell, I'm still called it now but I digress.

The worst thing about this one shot is the simple fact that there is a seed, a nugget of a good idea.  Pretty much any fandom is ripe for a spoof one shot but with this one, it almost seemed too easy and that lead to the humor feeling forced and sometimes even lazy.

It's the same with the art.  It really came across as feeling like there were so many people trying to get their styles in to the story that it came across as massively disjointed and very hit and miss.  That's a real shame because the art really could have pushed the story a lot further than it ended up doing.

All in all, this is one of Dynamite Entertainment's poorest releases.  Between the lazy, forced writing and the hit and miss artwork, I came away feeling quite disappointed with it all.  It's a shame really because this could and should have been very funny.  You can see a gleam of that in the ending few pages where they manage to bring about the apocalypse by accident.  Now that bit made me laugh but the rest of it, not so much.