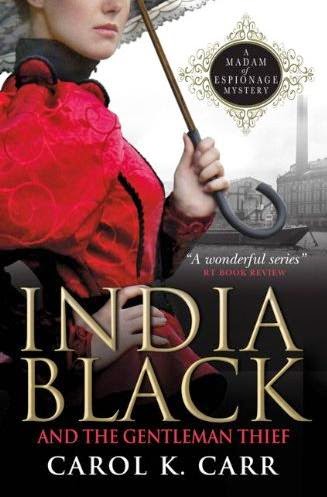 
India Black’s double life operating a high-class brothel and running high-stakes espionage for Her Majesty’s government can take its toll. But there’s no rest for the weary—particularly when an international conspiracy comes knocking…

India Black is one of Victorian London’s most respected madams—not a bloody postmistress. So when Colonel Francis Mayhew forwards a seemingly innocuous shipping bill to her address, she’s puzzled. And when three thugs bust down her door, steal the envelope, and rough up both her and fellow agent French…well, that’s enough to make India Black see red.

The veteran spies soon discover that Mayhew has been butchered in his own bedroom. An impromptu investigation leads them to London’s docks, where India makes a startling discovery she can’t bear to tell the rakish French—she has a history with their chief suspect, the gentleman thief who once stole her heart…


The first two India Black novels by Carol K. Carr were well paced and very exciting tales featuring a Victorian madam and a hell of a lot of twists and turns.  In fact, I would say that they are a pair of books that improve with each reading.

When Titan Books very kindly gave me the chance to review the third in the series, I must admit that I full on jumped at the chance to get my crime loving little hands on it.  However, would it be as good as the second book in the series, which is the best of them thus far.

Well, the answer to that my friends is no.  It's even better.

The twists and turns in this one come thick and fast, which is definitely where one of Carr's main strengths is.  She has an ability to drop a bombshell about Black's most recent case or about one of the characters involved at just the right time to get a massive reaction from the reader.

With the second book in the series having a cliffhanger of sorts that left me eager to find out more, I couldn't honestly see how Carr would get this one to match up to that but not only does it match up, it surpasses it in style.  We now know who Black is, who her mother is and I must admit that I can seriously not wait to see where that is taken in the next book.

With danger, intrigue, revelations, a former lover turning up and Black on her best cynical yet intelligent behavior, this book really does grip the reader tight and doesn't let go.  Also with an ending that more than sets up a fantastic, rollicking adventure for India Black, I am very excited to see just where Carr is going to send her brilliantly written Victorian madam.