Empire State: A Love Story (Or Not) Review 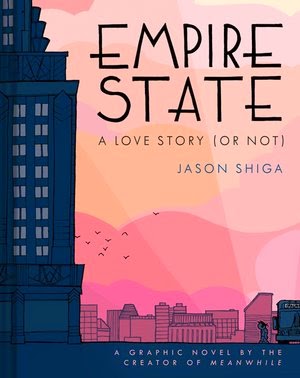 
Jimmy is a stereotypical geek who works at the Oakland library and is trapped in his own torpidity.  Sara is his best friend, but she wants to get a life (translation: an apartment in Brooklyn and a publishing internship).

When Sara moves to New York Citym Jimmy, after much anguishing, decides to follow her...and Sara isn't the only one in for a surprise.

Bold visual storytelling, sly pokes at popular culture, and subtle text work together seamlessly in Empire State, creating a quirky graphic novel comedy about the vagaries of love and friendship and the mishmash of both.


I am a massive fan of stories and graphic novels that deal with the many and varied aspects of a normal persons life.  From authors such as Daniel Clowes and Rachael Smith, there have been a great many different takes on the well used genre.

With this graphic novel from Jason Shiga, a winner of the 2003 Eisner Award for Talent Deserving of Wider Recognition, comes a lot of expectation.

After reading Empire State, one of the things that struck me was the simple fact that it doesn't really fall in to the traps that some of the other titles in this crowded genre can fall in to.  There are no easy fixes for the characters, no magical buttons etc.  Instead we have a story with a sweet nature, realistic characters and a great deal of nods to a lot of pop culture icons.

The characters themselves are absolutely fantastic.  I found myself identifying with them and even rooting them on at various moments in the story and even smiling as their actions brought back some great memories of my own little 'adventures' in my life.

That's where the cartoon style really shines and raises the story up.  Shiga's style makes the story really come to life and at times, made the story feel like an animated indie movie.  Obviously that's meant as a compliment because I couldn't put the book down and finished it in one sitting, which is quite rare for me with a graphic novel.  Normally I will do graphic novels in two to three sittings so that I can let everything sink in but this one was so addictive that I wanted to see just what was going to happen to Sara and Jimmy, especially after they move to New York.

The simplicity of the art and story is actually one of the main things that makes it so believable and a story that will both stay with you and also warm your heart.  I also liked the fact that we didn't get a stereotypical ending or any of the cliched turns that can sometimes plague other such stories.  The links to other pop culture references are well done and well placed, which works very well with the pacing and the story.

If you are a fan of stories written by such people as Rachael Smith or even of Daniel Clowes, then you will absolutely love this one so check this one out.