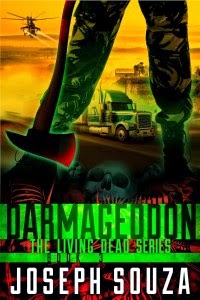 
Dar and her band of survivors must flee for their lives after a terrorist blows up the fence protecting their Boston camp.

Departing what was they home for quite some time, the group heads to Washington State to find Dar’s family.

Hot on their heels is the egomaniacal General Townsend who has set his sites on two things Dar has…the President of the United States and the “ghost” Annabelle, a girl who can walk freely among the dead.


Having reading the first two books in Joseph Souza's The Living Dead series, I was very eager to sit down see just where he was going to take the now familiar characters.

So in this, the third and final entry of the series, we are treated to the return of everyone's favorite psycho leader in the shape of Dar.  One of the things that I have liked about the character is the change that you see her go through in the chronology of the books when went together.  In the first one, as I said in the review, I could not wait to see her character die a hopefully painful death.  Then in the second one we discover a little bit more about her and start to warm to her.  Now here, we are seeing her in all her glory.

The story itself is very well paced and I really think that this shows Souza really hitting his stride with the series.  It's almost as if his confidence with the characters has grown with each installment and that makes the trilogy very interesting.  We get the return of some of the characters we both love and love to hate but the star of the show for me was General Townsend.  I just loved how completely insane he was and how his character walked the line of being realistic but over the top without falling in to the trap of it being a caricature like you can sometimes get in this genre.

With this being the third and final book in the series, you really get the sense of it building to something huge and we get that with some major twists thrown in to the story at some brilliant times.  The pacing sometimes flits between balls to the wall and subtle yet that works without feeling disjointed.

I must admit that with the trilogy now at an end, I find myself really wanting there to be more.  I want to see more of the characters, more of the back story and more of the world that Souza has created but he ends it perfectly here and as a fan, I really think this is the best of the series by far.  The first two were very good and I really enjoyed them but with this one, I just couldn't put it down at all.  It's definitely one of those "just one more page" books that you start reading and before you know it, it's the early hours of the morning.

The amount of action here will satisfy pretty much any fan of the action genre while there are some truly brilliant scenes that will most definitely get the nod of approval from the horror fans out there.  Souza is one of those rare authors that seem to be at home in any genre he picks and that's on show here with yet another great release.

If you love your zombies and action then this one is definitely well worth picking up.  If you are a fan of the first two novels in the series then you will need to add this one.  Not only do you see some growth from the now familiar characters, you also get to see some of the more hated ones get their comeuppance in typical Souza style and who wouldn't want that?