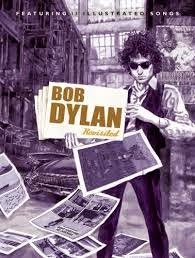 
Rendered in striking, explosive graphic form, many of Bob Dylan's most famous songs illustrated as they've never been before.

For the last forty years Bob Dylan has never ceased to be one of the most creative and inspired musicians in the world.

Mesmerized by the power of his lyrics and intrigued by the possibilities of translating his powerful, enigmatic personality in to art, thirteen leading graphic artists banded together to create this unusual testament to the universality and transcendent vision of an American musical genius.

With their vibrant, unexpected colors and dynamic, cinematic imagery, this group has assembled in Bob Dylan Revisited one of the most provocative interpretations of Dylan's music.  These artists capture the tender emotions, the ineffable sadness, and the romantic overtones of Dylan's classic songs, at the same time reflecting the moral and political urgency of his music.

Each artist's style surprisingly complements Dylan's lyrics and offers an irresistible window through which to reconsider one of America's most enigmatic artists.


As a massive Bob Dylan fan, I am completely in love with the lyrics, music and the sheer amount of imagery that each of his songs can invoke.  One of the things I love most about his creations is the simple fact that they can mean so many things to so many people and that is exactly where this book comes in.

With a group of thirteen of the worlds leading graphic artists all taking attempts at taking their favorite Dylan song and creating their own take on it, you would fully expect one of two things.  A hit and miss collection that ends up being at the very least entertaining or a complete and utter mess.  This, however, is neither of those.

I would say that this collection not only takes some of the mans most famous songs and puts their own spin on them but they also do the legendary reputation of both Dylan himself and his songs justice.

Each one is completely different from each other and just like the songs themselves, painfully beautiful in their own rather unique ways.

Obviously Knockin' on Heaven's Door is one of Dylan's most famous and heart breaking songs and here it's given a painfully beautiful yet simple take by the artist Bramanti.  The gorgeous imagery that Bramanti uses really sits side by side with the lyrics in such a way that it brought a tear to my eyes.

Another highpoint for me is the interpretation of Desolation Row by the supremely talented Dave McKean.  His unique art style matches the urgency and important of Dylan's lyrics nigh on perfectly and definitely made what is one of my favorite songs of all time in to one of the best pieces of work in this collection.

I could just sit here and go on and on about how beautiful and massively gripping the work in this collection is but I would rather you just go grab yourselves a copy and read it with your own eyes.  Not only do you have the legendary lyrics of Bob Dylan, probably one of the greatest songwriters that America has ever produced, but you also have some of the worlds best artists all putting their hearts and souls in to making their versions of his stories in to something that will definitely take pride of place on any fans, and even non fans, bookshelves.