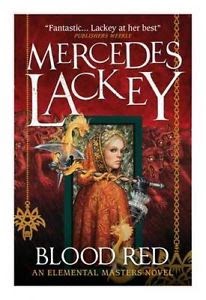 
As a young Earth Mage, Rosamund von Schwarzwald was tutored in magic by her adoptive grandmother, a wise and powerful Earth Master.

But when her beloved mentor was brutally murdered by a werewolf, Rosa was taken in by the ancient forest's Hunt Master.  Taught to harness the full power of her gift, Rosa became a skilled huntress, protector of the forest and the scourge of evil - with a deadly speciality in shapeshifters.

When a string of grisly murders takes place in the remote countryside of Transylvania, the local Elemental Masters suspect a dark power is at work and desperately come to Rose for help.

But if she agrees to track down the same creatures that haunt her past, will the hunter become the hunted?


With the Elemental Masters series by Mercedes Lackey dividing her fans in to two camps, I was wondering just where this latest installment would fall.  Some of her fans have absolutely fallen in love with the mixture of fantasy and fairytale worlds and others have decried them as being some of her poorest work in her long career.

I must admit that even as a long term fan, I seem to fall firmly in the middle of the two camps.  I agree that they are nowhere near as good as her early work and that they are a bit hit and miss in places but I have, for the most part, enjoyed them.

Lackey's superb world creating skills are definitely on show here and the world that she has moulded in to the fairytale image with darker tangents has more than gripped me as a reader.  The rest of the series tend to sometimes feel like it needs a bit of trimming and editing and that's the case here to a lesser degree.  There were a couple of moments that I personally would have exercised in order to give it a bit of a smoother flow but it doesn't impede the story too much.

Aside from that slight problem, I really think that this can be classed as one of the better installments in this series by far.  The fact that she has taken on the story of Little Red Riding Hood and made the character feel like one her of own is really a sign of how good Lackey can be when she brings her 'a' game to her stories.

I did really like that Rosa was a strong willed character and it was nice to see such a well written female character.  The only problem with the character that I had was the simple fact that she would sometimes go on these long moments of rambling that seemed to sometimes go nowhere and sometimes would give us a major plot point.  There never seemed to be a consistent reason for moments and that hurt the character a little bit but when the story really started to pick up steam, that was near enough forgotten when we really got to see her in her element.  Sorry, couldn't resist it.

All in all, this is definitely not one of her best books by a large margin but that said, it's really not as bad as some of her other fans have made it out to be.  Take it as it is, an interesting take on the Little Red Riding Hood story with a bit of a grimmer take.  OK, I'll stop with the puns now.