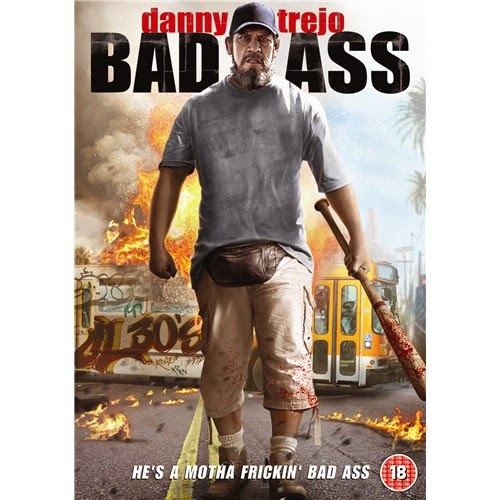 
Decorated Vietnam hero Frank Vega returns home only to get shunned by society leaving him without a job or his high school sweetheart. It's not until forty years later when an incident on a commuter bus (where he protects an elderly black man from a pair of skin heads) makes him a local hero where he's suddenly celebrated once again. But his good fortune suddenly turns for the worse when his best friend Klondike is murdered and the police aren't doing anything about it.


Let's face it guys and girls.  With a title such as Bad Ass, you pretty much know what you are going to get when you stick the disc in to the DVD player.

If you're looking at the DVD cover and thinking yep, it's going to be Danny Trejo kicking the daylights out of people while looking angry, then you would be 100% right.

One of the things that I really liked about the movie itself is that it really has a late 1970's revenge movie feel to it.  Kind of like watching a Death Wish movie or something along those sorts of lines.

The story itself is apparently based on some American incident on a bus where an elderly man had a fight with a young passenger that was berating him but I'm not all that familiar with the incident itself so I looked at the movie in a simple way.  Did I enjoy it?  Was I entertained by it?

Simply put, the answer is yes to both questions there.  It's not all that original and there are some utterly bizarre moments where you wonder just what the production team were aiming for.  There are also a couple of sub plots that didn't really add anything to the story itself, such as the romance one between Trejo's Vega character and Joyful Drake's character of Amber Lamps.  While sweet, thanks to the performances, I don't really feel that it added all that much to movie itself.

That said, the cast do a pretty good job with the sometimes cliched dialogue and story.  It's the sort of dialogue that if you have ever seen an action movie about a man wanting revenge for the death of a friend then you would have heard the same or similar before.  However, the cast actually do a really good job of making it seem interesting and well worth watching.  I really liked some of Trejo's one liners while beating the daylights out of people.

I was also surprised with some of the people that actually signed on for this movie.  You have Ron Perlman, Hellboy himself, as well as the criminally under rated Charles S. Dutton.  While the revelations about the characters aren't groundbreaking or even original, these two really owned the movie in their scenes and made what could have been quite boring characters in the hands of someone else rather boring.

I would be remiss if I didn't mention the awful theme tune that runs throughout the movie.  It's just a beat repeated while someone says about being a bad ass over and over again.

All in all, this isn't going to win any awards for originality but if you leave your brain at the door and just sit back expecting to have some fun then this is definitely well worth grabbing, especially as it's available so cheaply.

Posted by Pat Scattergood at 09:14