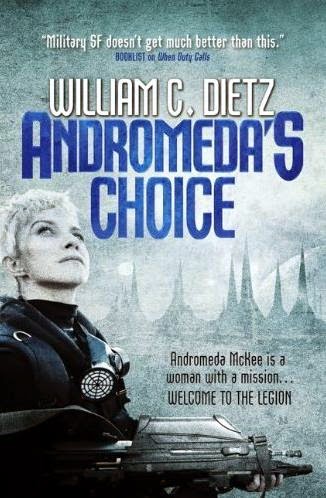 
Andromeda McKee rebuilt her life in the violent embrace of the Legion of the Damned in the days when cyborgs were first being introduced. Now she must choose between her conscience and her desire for vengeance...

In a different world, Lady Catherine “Cat” Carletto would never have left her pampered life behind. But when Princess Ophelia became Empress Ophelia in a coup that claimed the lives of the princess’s brother and all who supported him, including the Carletto family, Cat had to hide—or die.

She became Legionnaire Andromeda McKee, and now she’s a battle-scarred veteran who knows how to kill.

Summoned to Earth to receive the Imperial Order of Merit from the empress herself, Andromeda learns that she isn’t the sole surviving Carletto—her uncle Rex is not only still alive but also the leader of a resistance group determined to overthrow Ophelia.

Caught up in a web of intrigue, Andromeda realizes that the moment is coming when her revenge will be at hand. But will she be able to act, or will she be betrayed by those she has come to trust?


Andromeda's Choice is the second book in the Legion of the Damned prequel series and what a blood thirsty entry it is.

Some of the characters that we know from the first entry fall like flies during this installment and each one comes across as shocking because they really do seem to happen when you least expect them.  Normally in the science fiction genre, the deaths can sometimes be telegraphed but that's not the case here.  Dietz really does know how to give the reader a punch to the gut with his writing and that is most definitely evident here.

The thing that struck me the most was the change in pacing when compared to the previous installment. Dietz has quickened the pace here yet it doesn't feel rushed in the slightest, instead having a cinematic and exciting feel.  The story here really does come across as something that you could see up on a giant cinema screen.  That's both thanks to the pacing but also to the utterly superb action sequences.

I have to admit that this one is definitely a lot more action based than before but don't let you think that the characters have been sacrificed to make that happen.  That would be a real shame to count them out because not only do we have some returning characters, we also see some new ones that you just know are going to play an integral part in Andromeda's story.

As well as being action packed, there are some well timed twists and turns through out the story as well as some great nods as to what may or may not be about to happen in the future.  I loved that Dietz wrote that in such a way that if you are a previous reader then you will be more than rewarded for sticking with the series but if this your first book then you won't be lost at all.

If you a fan of science fiction novels with a great dash of action and military then this one is definitely going to be up your street.  Plus with a name such as William C. Dietz then you know you are going to be in for an exciting ride.