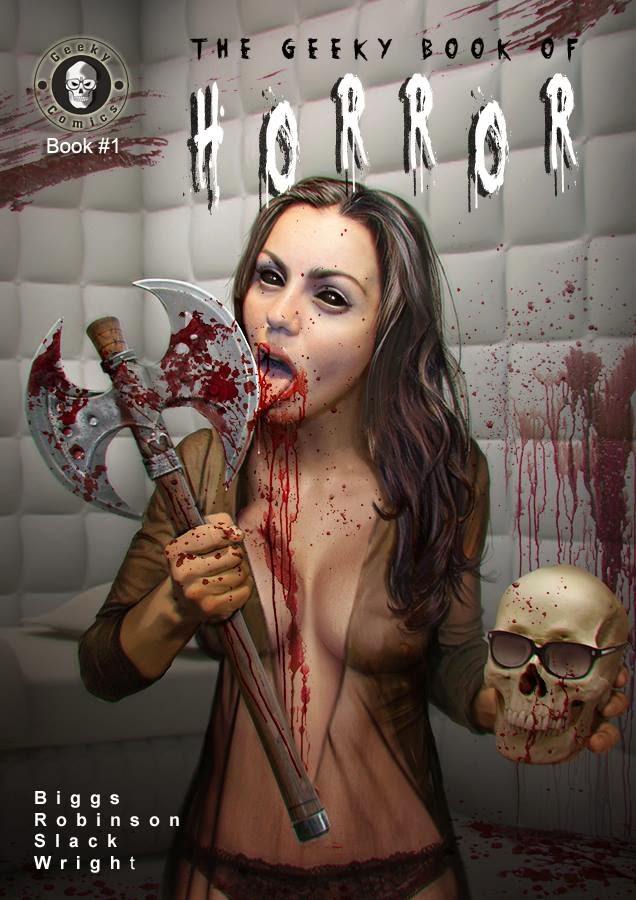 A group of talented writers are creating a horror anthology. Writers Victor Wright (Author of Light of Darkness), Jeremy Biggs (Writer of Bearlands), Nathan Stack (Writer of Risen) and John Robinson are proud to announce their new Kickstarter campaign, which will kick off on 7th July.

‘The Geeky Book Of Horror’ is an anthology of horror stories like those you grew up with. All of the stories are new never before published. The twisted set of tales will suit the demands of today’s horror aficionado and will produce just the right amount of spine chill.

When asked what the goal of the anthology is meant to be Victor Wright stated “We wanted to write a book that would chill you to the bone; I think this does just that!" Wright is the author of the 'Light of Darkness’ series of books and several top selling independent comic titles as well as being MARsocial ‘Author of the Year 2014’ runner up and Writers Bureau ‘2014 Writer of the Year’ runner up. "It's great to be working alongside such great talent. These guys are gonna freak you out,” says Wright about his co-writers, all of whom have successfully published their own titles. One of the collaborators for the project is Jeremy Briggs who is not only the author of Bearlands series but also of the highly successful Kickstarter campaign - ‘Metal Made Flesh’.

The anthology will be approximately 128 pages, a total which is subject to change, and will carry two stories or more from each writer. As each writer has their own style, artists from all over the world will be supplying the illustrations. These include Mario Gully (Image Comics/Marvel) creator of ‘Ant’ the hit series by Image Comics and Maxi Quy a water colour painter living in New York. In order to link each of the stories in the anthology and in keeping with the theme of horror stories from the past these illustrations will be in black and white.

Geeky Comics, founded by Victor Wright is an independent publisher specialising in War, Horror and Crime titles. As an international team, they bring you the hottest creators in the comic scene. They are based in the UK, but ship their titles worldwide. In an effort to bring their fans only the very best the comic world has to offer, they welcome both positive and negative feedback. Whether you choose to write to them or to speak to them in person at one of the many comic conventions which they attend every year, they will not be sorry to see or hear from you and will answer all questions you may have.

The creators are asking for £6000 to produce the graphic novel. Backers who pledge £20 will receive a copy of the book, while the higher tiers will receive artwork, signed copies of the book, merchandise and much more. If funded, The Geeky Book Of Horror is due for release in December of 2014. The campaign will start on the Kickstarter platform on July 7th.

If you would like any other information about the anthology then email Victor Wright at vic@geekycomics.com
Posted by Pat Scattergood at 00:41