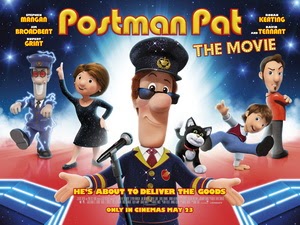 
A well loved and veteran Postman finds his beliefs tested when he enters a television talent show in order to win a holiday to Italy for his wife.


Like a lot of other people, I grew up watching television shows such as Fireman Sam, Thomas the Tank Engine and Postman Pat.  Some of these and others have made the jump in to movie form to varying degrees of success.  There have been some straight to DVD Fireman Sam adventures that while not terrible, haven't set the movie world alight.  There have also been some adventures for the little blue train Thomas the Tank Engine too that have met with varying degrees of success.  That said, the less said about Thomas and the Magic Railroad the better.

When they announced that they would be making Postman Pat in to a movie, I had very low expectations for it. Then they showed the trailer to the world and those expectations stayed low but what would the movie itself be like I wondered?

Well, I took my five year old son to watch it and I have to admit that he absolutely loved it.  That said, there didn't really seem to be all that many similarities to the Postman Pat of old but I suppose even children's shows have to move with the times right?  The one thing that bothered me was that even though it was rated at a U certificate, meaning kids could see it no matter how young, there were some moments that I would class as a bit too scary for the younger ones.

The story itself doesn't exactly scream originality.  Pat wants to win a holiday for his long suffering wife and therefore enters a television talent show with quite a few mundane results.  It's not a terrible story by any means but neither did it hold my interest that well.

However, that said there were some great moments for the parents in the audience in the cinema that really made me laugh, such as an appearance by a well known bad guy from the Dr. Who television show.  That got a few chuckles out of this cynical old soul, along with a few other moments.  For the most part however, the humor just seemed a bit forced and unfunny.  I mean come on, Simon Cowbell?  I wonder who that would possibly be a parody of.

That said, the cast do try their best with some really cliched and sometimes even bad dialogue.  Stephen Mangan does a great job at making Pat himself seem sympathetic but the movie definitely belongs to the tenth Doctor himself, David Tennant.  He seems to having a ball as Wilfred and it shows in the sheer glee that he delivers his lines.

Some of the moments in the movie seemed to go over the heads of the little ones in the audience and that's a real shame.  The story seemed to be aimed at older children yet at the same time, it's that age range of children that might have found this story a bit boring in itself.

I'd be remiss if I didn't mention the animation.  I'm not one of those sorts of people that moans when they change a show from stop motion to CGI or what have you but the animation here seemed a little rushed and cheap in a couple of scenes, especially in the facial expressions but that said, it's definitely better than the animation in Top Cat: the Movie.

The thing that the writers seemed to have missed is that Postman Pat is most popular amongst the pre-school age range and slightly higher but a lot of the jokes and scenes seemed a little too old for young ones in the audience.

It's a bit of a shame really as this could have been a great shot at bringing the beloved character to a whole new generation but for the most part, it just seemed kind of there and not all that memorable.

Posted by Pat Scattergood at 11:56