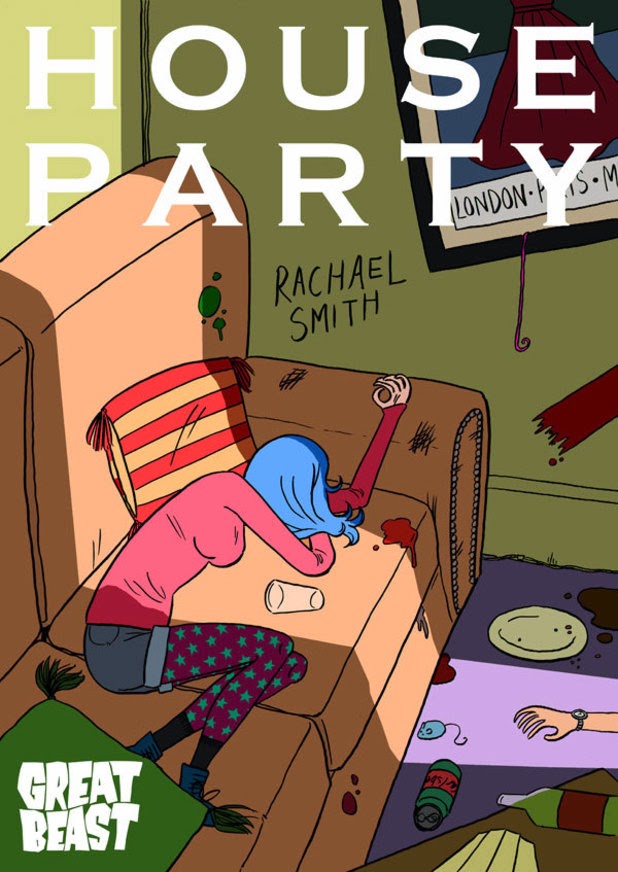 The story follows three 20-somethings Michelle, Siobhan, and Neil, who are having trouble adapting to life in the real world since feeling like superstars at university.


As visitors to this site know, I am very much a fan of indie comics and movies.  I tend to find that they are more open to taking risks with their stories and their art than the mainstream ones and that's one of the things that I like the most.  I will admit that can sometimes be one of their biggest failings too but the fact that they are at least willing to take the risk is enough for me to want to pick them up.

That's where I come to Great Beast Comics.  They, just like Self Made Hero, have a great reputation for putting out really high quality books and stories so when they signed the Leicester writer and artist Rachael Smith, I couldn't wait to see what the end result would be.

That end result is House Party and is the debut novel debut by the renowned Smith.  She's well known amongst comic book fans as someone that really excels at creating characters that are realistic to the point of feeling like the sort of people that you would meet in everyday life.

With House Party she keeps that tradition rolling on in a very impressive way.  In fact, she captures the feeling of hope and sometimes cockiness that comes with going to university and feeling on top of the world but then getting dropped back down to Earth with a bang when they come back from that rite of passage.  There really is a great mixture of the feeling of hope and sometimes futility that comes with youth in that no matter how good the intentions are, life can sometimes still throw you for a loop.  That's evident here when the group decide that they are going to throw a huge house party to regain some of that feeling they had when feeling so mega stars at the university.

The story really does a fabulous job of not only taking a little more of a cynical look at life but you also come away from the story with a bit of hope as well.  A bit like having a feeling of things not being as bad as you may have thought at first.

Art wise, if you have read any of Smith's work before then you know pretty much what to expect with her bright and colorful yet down to Earth art.  Think Daniel Clowes but with a bit of added color and you are pretty much halfway there.