A Fantastic Fear of Everything DVD Review 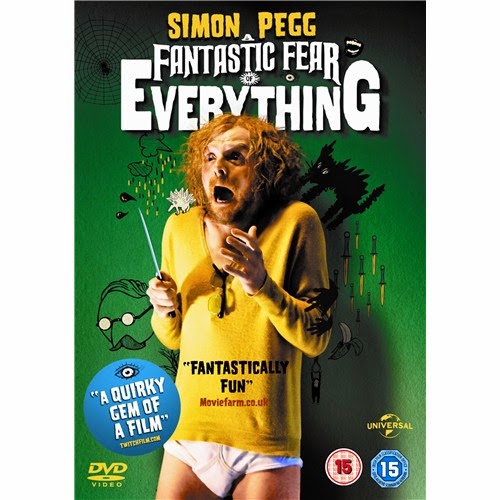 
Jack (Simon Pegg) is a children's author turned crime novelist whose detailed research into the lives of Victorian serial killers has turned him into a paranoid wreck, persecuted by an irrational fear of being murdered.

When Jack is thrown a life-line by his long-suffering agent, and a mysterious Hollywood executive takes a sudden and inexplicable interest in Jack's script, what should be his 'big break' rapidly turns into his 'big breakdown' as Jack is forced to confront his worst fears; among them love, laundry and serial killers.


I'm known amongst my friends for having a bit of an off kilter sense of humor and so I went in to this movie wondering if it could really be as bad as some of the reviews made it out to be.  There really were some damning reviews out there about this movie.  Could it really be that bad?

The simple answer is no it's not but I can see why it got some bad reviews.

With my sense of humor being a bit strange, the synopsis of this one really sounded like my cup of tea and so I sat down with the wife to see just what it could be like.

Written by the lead singer of a band called Kula Shaker, this movie starts off really slowly and I mean a snail pace slowly.  That's one of the things I like about it however.  It really did a good job of showing the character descending in to madness and how his surroundings change according to whatever his mindset is.  That said, I can see why the pacing of the first half of the movie would put some people off but for me, I loved how Simon Pegg showed the slowly sense of paranoia that is creeping in to his world.

That's when it picks up speed and while it lost me a little when it did, I found myself really hooked in to the ride.  I wanted to see why Pegg's character was that troubled.  The idea of him seeing murderer and mad people around him the further he gets in to his research for a book on Victorian murders is a well done and well acted moment in the movie and really gives it a quirky, indie feel to it that runs through out the rest of the movie itself.

I can see why it didn't suit everyone.  Some of the humor is a little hit and miss but at times, the movie itself is very funny and even touching in places.  The scene involving the little boy in the laundrette is touching and heart breaking.

All in all, this isn't a perfect film by any stretch of the imagination.  There are a couple of moments where the acting goes a little over the top and you could cut a couple of scenes out to tighten the movie itself up a bit but that said, it's a fun and quirky little movie that really deserves to be seen by more people than it has.

Posted by Pat Scattergood at 07:52