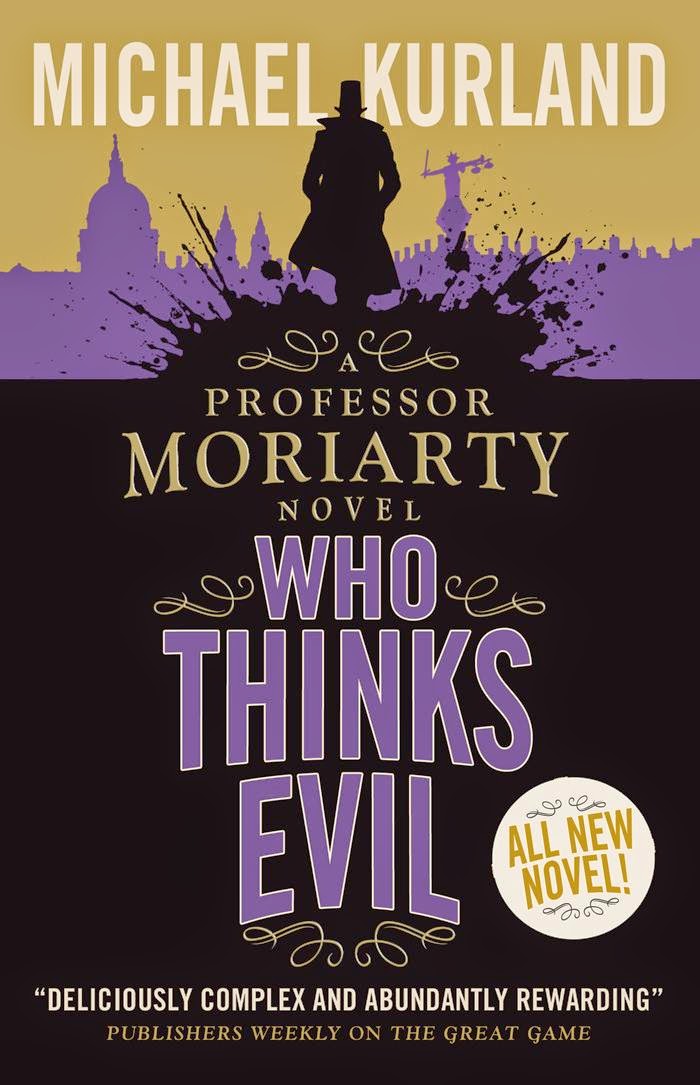 
London, 1892, and a young nobleman goes missing under distressing circumstances.

Prince Albert, grandson of Queen Victoria, has disappeared while visiting a house of ill repute, leaving behind a woman's body.

Hoping to find the prince and to clear him of the murder, the royal family is looking for a brilliant - and, more importantly, discreet - investigator.  With Sherlock Holmes unavailable, his brother Mycroft turns to the only man who might just be more brilliant - Professor James Moriarty.

But the Professor is himself on trial for murder.  In exchange for his release, the so-called "Napoleon of Crime" will use all his resources to track down the missing prince.  If he fails, he may never again draw another free breath...


Michael Kurland has gained a good reputation for writing well paced and exciting crime books with twists and turns galore.  I have to admit that while I was familiar with his work, I hadn't read any of the Moriarty novels that he has written yet.

Well, after reading this one, I will definitely be checking out the others.

Here Kurland has crafted a quick fire thriller that had me guessing all the way until the end reveal.  I had to admit that as a massive Sherlock Holmes fan, I've always been interested in how the other characters see the investigations or even investigate the crimes themselves.  The fact that the story features Holmes' arch enemy Moriarty is a great touch and really gives the story a bit of a harder and slightly more cynical edge to it that it may not have otherwise had.

The twists and turns come thick and fast yet Kurland seems to be a master at choosing when to go for the reveal and when to add another clue to the mystery.  In places the writing reminded me of a bit of a mix between Agatha Christie and Sir Arthur Conan Doyle but with a modern flair.

Kurland also does a great job of making the characters really come to life.  In fact, that's one of the best parts of the novel itself.  The characters, even the minor ones, come across as fully fleshed out and realistic.  That really helps when some of the revelations start to come out because there were even a couple that I didn't expect to come, especially from the characters that they did come from.

The story itself has a great pace to it.  In the beginning, it takes a few pages to set the theme nicely and then when it all starts to happen, you really start to feel the tension running through it all.

Titan Books have gained a growing reputation for putting out some really well written Sherlock Holmes related titles and this one is no different.  It really fits in with the level of quality set by those other titles yet also stands on it's own two feet as a completely different title too.

If you are a fan of well written thrillers or a fan of crime novels in general then this one is definitely well worth picking up.  It's the same if you are a fan of Sherlock Holmes and some of the other characters created by Sir Arthur Conan Doyle.  Kurland does a superb job of not only doing a legendary character justice but also putting his own unique spin on him too.