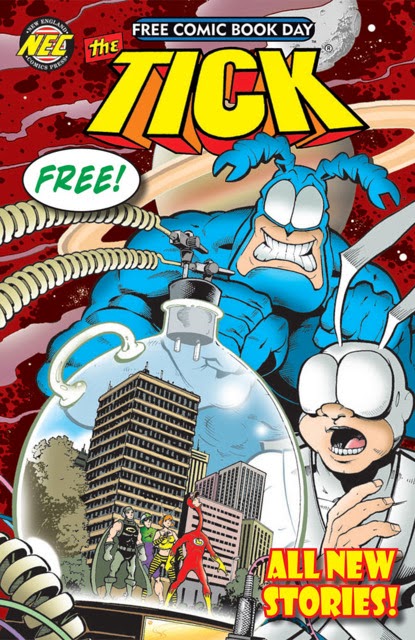 
The Tick and Arthur are back.  Someone's stolen the city.  Yes, the ENTIRE city is gone!


I have loved the original 'The Tick' stories as well as the massively under rated television series so when I found out that they were going to do a story for this years Free Comic Book Day, I knew exactly what I would be picking up when I got in to the shop.

Since Ben Edlund stopped drawing and writing the stories, the stories never seemed to grab the gold ring that the original stories created.  That said, they have still been some great stories featuring one of the most inept superheroes in the world and his rather unlucky but patient sidekick.

This one is written by Jeff McClelland.  Here, McClelland does a superb job of crafting a funny and well paced story that features the plucky duo having to try to find who has taken the city.  Yeah, you read that right my dear readers.  Someone has stolen the entire city so the Tick and Arthur end up having to travel in to space to try and who exactly who has stolen it and why.

In typical Tick style, the mission doesn't exactly go to plan and that's why we love the clumsy guy and his sidekick.  No matter how they try, it always manages to go completely wrong yet the Tick's enthusiasm doesn't once wane.  That's one of the things I've always loved about the series of stories.  There's no bull, just a sense of action and fun.  While nobody would ever replace Edlund, McClelland is a great writer that really manages to catch the personality and unique humor of the characters superbly well.

The second story is one of those incredibly bizarre ones.  Yes I know.  You're reading 'The Tick' so of course it's going to be weird but this one is out there.  That said, the short length of it really helps it pack a very funny punch in it's finale.  It's true that you read it and just think 'what on Earth is going on?' but at the same time it is incredibly funny.

As a Tick fan, I was definitely not disappointed.  In fact, I thought it was a great issue and massively funny.  The team really caught the feel of the characters and of the things that made them so popular.  It only raised one problem.  Now I need to get out there and find some more issue and books featuring the clumsy crime fighters.