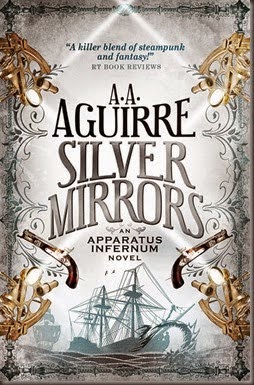 CID inspectors Janus Mikani and Celeste Ritsuko were lucky to make it out of their last mission alive.  Since then, strange troubles have plagued the city of steam and shadows, the result of magic released during their desperate interuption of an ancient ritual.

The fabric of the world has been disrupted, and the Council has assigned Mikani and Ritsuko to investigate.

They soon discover that matters are worse than they imagined.  Machines have developed minds of their own, cragger pirates are raiding the seas with relentless aggression, and builds to a crescendo, Mikani and Ritsuko must fight a war on two fronts - and this time, they may not be able to turn the deadly tide...


When I read the first book of the 'Apparatus Infernum' series called 'Bronze Gods', I stated that it came remarkably close to taking George Mann's crown as the master of the steam punk mystery.  That was a very lofty claim and I still stand by it, even after having read the book again.

When Titan Books offered me a chance to read the second book in the series, I was very excited but also a little worried.  How on Earth would Aguirre match the utter brilliance of 'Bronze Gods'?

Well, in this, the second book of the series, Aguirre doesn't overtake the quality of the first book but it does match up brilliantly well.  The action that was so well written in the first novel is present here and in some places, even surpasses that in the original novel but that's not even the best part of this one.

The world that was so well built up is not only here in all it's glory but is also expanded upon.  Aguirre does an utterly brilliant job of showing us so many different facets of that world  that it's almost cinematic in it's scope.  I would love to see the world that is written about here on the cinema screen, it really is that good.  Add in to that the characters that come across as exciting but also as realistic and you have a very good continuation of the series.

One of the things that I really loved about the book was that you could really see some of the influences at play here.  During the story itself there were flashes of Sir Arthur Conan Doyle and then even of Kathy Reichs yet retaining Aguirre's rather unique voice.  This really helped the story become one that you really can't put down.

If you were to compare it to the first one, I would honestly say that it more than matches up to the task of keeping the momentum going.  In fact, I was excited to see more of this series after 'Bronze Gods' but now after reading 'Silver Mirrors', I'm waiting with bated breath to see where the story and the mystery is going to be taken next.