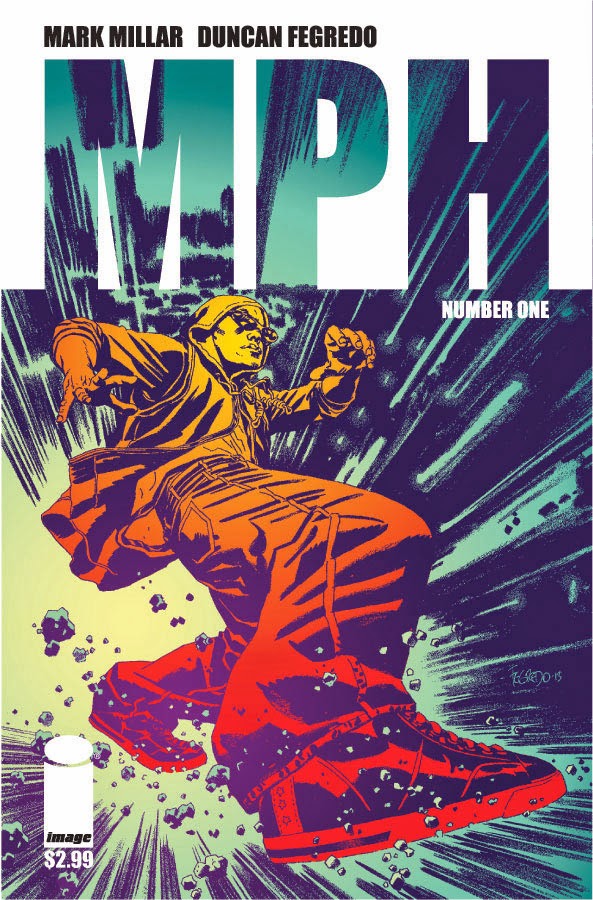 
Roscoe is a good kid, doing his best to earn his piece of the American Dream.  He keeps his eyes on the prize: His girl Rosa and a chance for a better life than the one he lives in Detroit.

He may not always make the best choices, but his heart's always in the right place.  Until it lands him in jail.

When a street drug called MPH filters down through the prison system, Roscoe gains the power of super speed.  Finally, he's got his shot.  Will he use it to do the right thing?  Or will the lure of an easy life be too strong to resist?

A high-octane adventure, MPH brings you super speed like you've never seen before, by the writer of Kick-Ass and the artist of Hellboy.


Mark Millar is one of those writers that comic book readers either think is amazing or they think that he is completely over the top.  Me, I'm firmly in the camp of the readers that like his work but I do have to admit, like I said in a previous review of one of his releases, I do agree that he can sometimes go a little over the top.
That said, I had heard a great many things about this upcoming series as it sounded like there was a lot of scope for it to tell a multi-layered story with a very sociological message running through the story but would that be what the fans would get?

Well yes and no but not in a bad way so let me explain.

One of the things that I liked about this one is that while you got a little bit of character development, it then jumped in to the action but with the promise of getting to see more of their lives in the next issue.  Sometimes when a writer tries that approach, it can seem like something is missing or maybe rushed but that's not the case here.  We get enough of the story to care about the main character so that when the twist hits, although it's one that's foreshadowed a little but enough to ruin it, you actually care about what is going to happen to Roscoe.

Mark Millar's writing here really hooked me in and made me want to get the second issue as soon as possible but it was the art here that really shone the most for me.  Duncan Fegredo, famous for his work on the Hellboy comics, really gives the story that hyper kinetic hit that it demands.  The story revolving around the power of speed, amongst other things, really needed an artist that was capable of kicking the story in to high gear and Fegredo does that in abundance here.  I was a little worried that the feeling of speed and urgency might be lost in the art but there are some absolutely brilliant panels here that really make the story leap off the page.

As a fan of Millar and Fegredo, I really think that their partnership kicked it up another notch here so bring on issue 2!