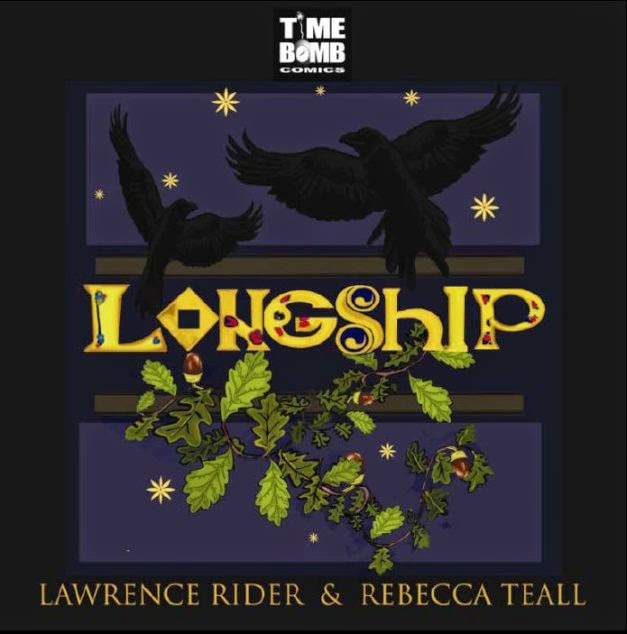 Art and Cover By
Rebecca Teal

“Longship” is written by Lawrence Rider with artwork by Rebecca Teall, and is the emotional and heart-warming story of a man’s funeral.

Utilising an unusual picture-book format that enhances the emotions of the story, Rider and Teall have weaved a stunning tale of life and death, of what you leave behind and what we will do to honour those we love, and is a stunning debut from two talented comics creators.


When I first started to look at this one, the first thing that struck me was the format of the book itself.  Instead of being the normal, bog standard graphic novel that we all know and love, it's done in a square and almost record sleeve shaped book.

I loved the fact that it looked so different as it definitely caught the eye and really had a sense of wanting to see just what it was all about to it.

Also, another one of the things that struck me was the absolutely stunning cover.  From looking at the cover I was expecting a historical story, maybe full of viking battles and adventures.  That's where the saying "don't judge a book by it's cover" comes in to play.

Instead of the historical battle filled epic that I was expecting, we have a wonderfully reflective, gently paced drama about a man's funeral.  You might think that this would be a depressing and slow dirge of a story but that's not the case at all.  Instead, we have a story that while it is about a funeral, you still come away from it with a sense of beauty, hope and honour.  It's a wonderful look at just how we can remember the ones we love and the ones we lose in our lives.

We begin the story at the funeral itself with the other residents having come out to see him and to say their goodbyes then it goes in to flashback story mode and really tells the story of the characters in a beautiful way.  Part of me was kind of expecting some sort of twist in the end but it never came, instead the story comes across as a wonderfully eccentric and beautiful story that feels completely realistic.

Art wise, the book looks like nothing else that Time Bomb Comics have put out before.  It's a wonderfully indie and quirky feel to the art.  In fact, I would even say that the art is some of the most beautiful that I have seen come out of the Time Bomb Comics camp.  Rebecca Teall isn't an artist that I was at all familiar with but on the strength of the art here, I would jump at the chance to see more.

This may not be the sort of graphic novel or story that you have read before.  The different format, setting and pacing of the story really make this a title that is definitely well worth a look.  It'll definitely be one that I will read again and again.