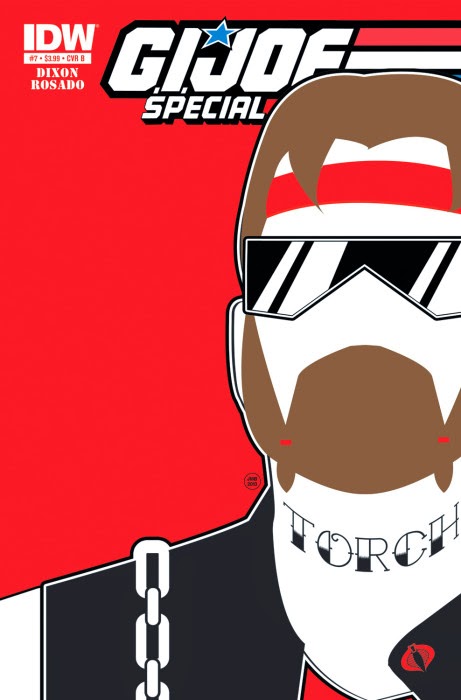 Art By
Will Rosado
Aburtov & Grafikslava


Beachhead, Tripwire and Hard Drive were taken hostage in the Australian Outback by the vicious Dreadnoks.  Led by Zartan, they had just acquired possession of a MARS Industries satellite...the same satellite that contained Zartan's genetic info used to revive him in his current form.

Roadblock and Spirit rushed to aid the captured G.I. JOE members as Zartan prepared to make an escape with his genetic information and return it to the lab where he was created in order to spawn an army of Zartans!


After reading issue 6, yes I know I was late to the party 'Special Missions' wise, I was quite eager to see where this mission was going to go.  Knowing that a couple of the members of the team were captured and Roadblock and Spirit were on their way to cause mayhem and rescue them was well written to the point where I couldn't wait to see what was going to happen next.

That's when I opened this one up and waited for the stuff to truly hit the fan so to speak.

The fast pacing and action packed panel work really made the story in the previous story really pop off of the page and that was repeated here.  While for some reason the story didn't seem as urgent in this issue, it was still wildly paced and well written.

One of the things that I really liked was the relationship between Spirit and Roadblock.  I liked the fact that they got on each others nerves while not resorting to cheap comedy like I've seen other stories sometimes fall in to.  Instead it really felt like while they worked together well, it didn't seem like an excuse to go the 'odd couple' route.  Their distinctive personalities really made for an interesting read in what could have just turned in to a cliched action movie style rescue mission.

With the fast pace of the issue such a bonus for this one, there isn't all much time for character development but at the same time, you don't really need it all that much here.  Instead, the best way to think of this issue is to think of a big budget action movie maybe even starring a younger Bruce Willis or Arnold Swarzenegger.  Just stick your feet up and watch the action unfold.  I love the sledgehammer hit of the ending too, which left me wondering just where they were taking the character of Zartan.

The art is just as on the ball as in issue 6 and really pops in the action sequences.  That was most definitely one of the strengths of the previous issue and it is the same here.  I would have preferred a slightly grittier tone to the art for this one but maybe that's just a personal taste of mine.

All in all, I will definitely be keeping up with this title.  Personally I can't wait to see where Zartan is going to go, where the team members go after this mission and more.  Worth picking up if you like a fast paced action story.