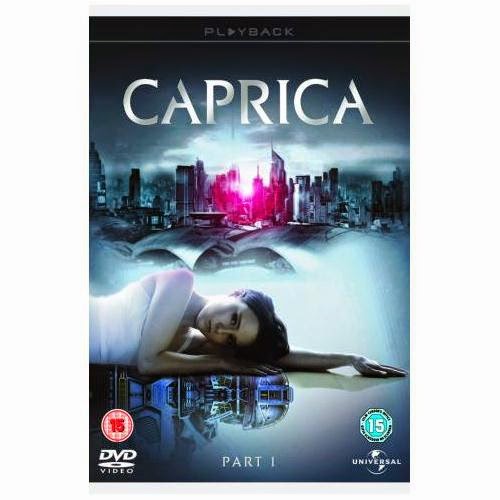 
The Battlestar Galactica phenomenon continues with this undeniably compelling look at where the real conflict between humans and Cylons began, in a vibrant world remarkably like our own: Caprica. Fifty-eight years before Battlestar takes off, two powerful families - the Graystones and the Adamas - find their destinies irrevocably intertwined after a devastating explosion. As the two houses both struggle with the line where humanity ends and artificial intelligence - the Cylon race - begins, they'll face off in a battlefield of corporate conspiracy, murder, sexual politics and family backbiting. From executive producers Ronald D. Moore and David Eick comes this highly anticipated prequel starring Golden Globe nominee Eric Stoltz and Esai Morales.

Episodes Comprise:
1. Pilot
2. Syfy Pilot
3. Rebirth
4. Reins Of AWaterfall
5. Gravedancing
6. There Is Another Sky
7. Know Thy Enemy
8. The Imperfections Of Memory
9. Ghosts In The Machine
10. End Of Line


As a fan of the original 'Battlestar Galactica' as well as the remade version by Ronald D. Moore, I was quite eager to get to see this prequel series to see just how the whole Cylon story came about.

It's true that spin off series don't have all that much of a good track record and that's true of 'Battlestar Galactica' in itself as well in the shape of 'Galactica 1980' but I fully feel that this first installment more than makes up for the memory of that series.

Some of the complaints I have read about the series have been utterly redundant in that some reviews have moaned about the lack of Cylons, this was set before they came about obviously, and that there wasn't enough action.  Those sorts of reviews do nark me a little in that not every science fiction series has to have explosions and wild gun fights every second in order for it to be an interesting show.

The best way to describe this would be that it felt a little bit like a 'Battlestar Galactica' series but with a bit of a gangster / terrorist feel to it.  That to me, made it a lot more interesting and different than if it had just been a series of the early battles.

One of the things that I really liked about the series was that some of the scenes weren't shot in a stereotypical way at all.  That's especially true after the creation of the first Cylon itself and some of the emotional ramifications that come along with it.  That itself lead to some very beautiful yet heartbreaking moments.

Cast wise they do a superb job with the sometimes slightly heavy dialogue.  Eric Stoltz in particular was fantastic as Daniel Graystone, a man driven to the edge of madness and Alessandra Torresani as his daughter Zoe.  Their performances really gave the series a steady, beating heart at the center of all the conspiracies and twists that they manage to pack in to these episodes.

Special Features wise, what we have here do a superb job of not only showing us some behind the scenes information about the show itself but also some really interesting pieces on genesis of the series as well.  At the same time, I kind of wish that there had been a few more bits and pieces included but that's maybe just me being guilty.

All in all, this was an interesting take as a prequel series to a very popular television show.  I feel that the episodes in this first part of the collection more than held up their own next to the brilliantly remade series.  Don't get me wrong, it didn't reach the heights of that show but if it had have been given more of a chance to grow then I fully think that it would have done.