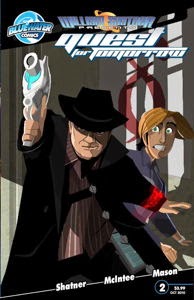 Written By
David A. McIntee


Those hunting him, who seem to know more about him than he does. When he is brought down to Earth, will friends or enemies he doesn't know he has, find him first.


William Shatner is obviously best known for his iconic role as James T. Kirk in the original series of 'Star Trek' and their many movies but he is also an accomplished science fiction writer too.  He has written the 'Tek War' series as well as many books set in the 'Star Trek' world so lovingly crafted by Gene Roddenberry.

I must admit that I hadn't realised that he had done some comic work here too so when I found out about this series, I was intrigued enough to want to have a read and see where Shatner would take us with a new non 'Star Trek' science fiction story.

I must admit that while not a perfect story by any stretch of the imagination, this is still a good rollicking tale that has a little bit of an old fashioned science fiction feel to it.  In fact, it reminded me a little of classic science fiction movies that I am so fond of.

The pacing is definitely one of the strengths here.  The quick telling of the story doesn't let up or let the reader catch his or her breath.  Instead it feels like it truly has a sense of urgency to the story telling and that really helps to hook you in.  One of the other things I really liked about the story was the simple fact that the creators didn't feel the need to tell the readers absolutely everything.  I like stories where you get to fill in some of the blanks yourself while also waiting for the twists and turns that will no doubt come in future issues.

However, the one bit that the issue fell down on was the art work.  It seemed incredibly hit and miss because in places the art was utterly superb and in others it seemed a little rushed and even unfinished.  That's a bit of a shame because it took me out of the world that they had created a little bit.  I'm not the biggest fan of the sort of art work in the 'big two' that feels so polished that it could shine in the dark but at the same time, I think that the art could have been brilliant if they had taken a tiny little bit more care of it.  The pages that were good really stood out and made me think of those science fiction cartoons that we all grew up watching in the 80's and 90's and I loved that about the issue.

All in all, while a bit hit and miss in the art department, this is still a series that I am going to keep up with.  The story itself really hooked me in and has made me want to see just what is going to happen next so bring on issue 3!