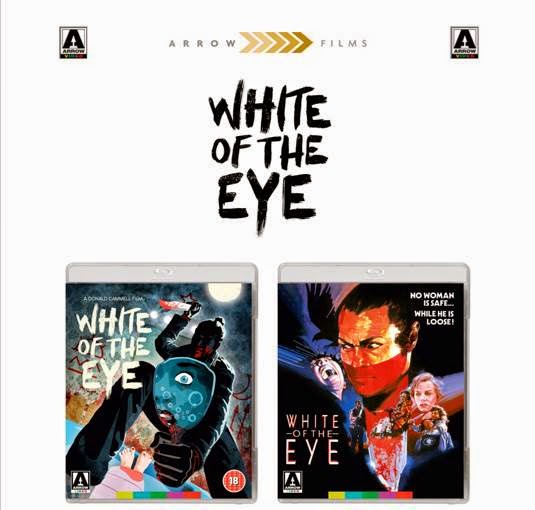 Based On
'Mrs. White' By Andrew Klavan and Laurence Klavan


A serial killer is on the loose in and around the small community of Globe, Arizona, and housewife Joan White (Cathy Moriarty) gradually comes to suspect that her opera-loving hi-fi engineer husband Paul (David Keith) might know more than he’s letting on…

So far so familiar, but in the hands of British visionary Donald Cammell (who wrote and co-directed Performance with Nicolas Roeg), the film becomes a dazzling kaleidoscope of images and ideas, spanning everything from Apache folklore, desert landscapes and stylish murder set-pieces that recall Dario Argento to a painfully vivid dissection of the emotional fissures undermining a modern marriage. It’s all set to an equally eclectic score co-written by Pink Floyd’s Nick Mason.


'White of the Eye' is one of those unsung movies that while utterly brilliant, it's been largely ignored by movie watchers.  The sort of movie where once you've watched it, it's completely unforgettable.

When a movie has such a reputation, it can sometimes not live up to that lofty expectation and therefore can be disappointing.  'White of the Eye' isn't one of those movies.  I can honestly say that this movie more than matches the reputation that it has amassed over the years.

The director Donald Cammell has made a name for himself for being a director that can craft movies that not only drag the viewer in and not let go but can also use the settings as if they were another character in his movies.  That is definitely true in this movie.  'White of the Eye' is the sort of movie that you can't take your eyes off of when you're watching it.

Story wise, the movie is perfectly paced and really turns the tension up.  In fact, throughout the movie, it really fells you with dread as you watch the crimes unfold.  I could sit here and analyze the whole movie but it's near impossible to do so.  This movie is unique, suspenseful and incredibly haunting.  How it's not a full blown classic is beyond me.  It definitely deserves to be.

A lot of that is down to absolutely brilliant cast here.  Cathy Moriarty is an absolute shining light as the heroine of the movie and really gives a strong performance that gives the movie it's heart that makes you feel involved with all of the characters.  The same could be said about David Keith, who I feel, gives his greatest performance by far here.  He comes across as incredibly charming in his role and has some great chemistry with Moriarty.

Once again, Arrow Films, has gone above and beyond with their special features.  The crowning glory of this release is by far the feature length documentary called 'Donald Cammell: The Ultimate Performance'.

The rest of the special features are brilliant.  I've always thought having covers that you can change with both classic and new artwork is a great touch and it's the same here with some great cover work.

All in all, like I said before, how this movie isn't a full on classic and on the best movies lists that we get so often is amazing.  It's full of suspense, twists and turns and is incredibly haunting and affecting.  Add that to the absolutely brilliant special features then I would honestly say that this is an essential purchase for all thriller fans.

Posted by Pat Scattergood at 10:44