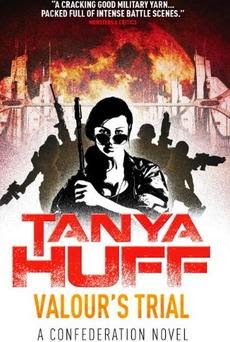 
Far in the future, an alliance of peaceful alien species known as the Confederation is locked in a continuous battle with the hostile Others, and it's up to humanity to protect them.

Gunnery Sergeant Torin Kerr has been declared missing, presumed dead.  But, unknown to the rest of the Confederation marines, she has been sent to an underground prisoner of war camp, alongside several one-time enemies.

Whilst trying to save herself and her new comrades, Torin makes a discovery that could shake the Confederation to its core, and bring an end to the war with the Others forever.


As a massive fan of Tanya Huff, I seriously can't get enough of her writing.  It doesn't matter to me if it's her 'Blood' books or any of her military action novels, Huff always seems to be able to write compelling stories with well grounded characters.

I've read the first three novels in the series and while the first two were fantastic, the third just didn't seem to gel as well as the first pair.  When this one was sent to me by those lovely folks at Titan Books, I had to admit that I wasn't all that sure about where this one would be going.

Well, I have to admit that this one most definitely hits the accelerator big time and gains back some much needed momentum.

Huff has always had a knack for creating interesting worlds full of characters with multiple layers and strong personalities.  This one is no different.  Whilst the third book in the series seemed to lose that strength a little, this fourth installment more than makes up for that.  We see some old enemies, Torin is still the ass kicking bad ass that she has been throughout the series and we get to see some new additions to the world as well.  Huff manages to tie all of these in to the 'Confederation' world without making it seem overkill.  In fact, she manages to introduce all of those while still maintaining the strong ties that regular readers of the series have to certain characters.

Action wise, this one is full of twists and turns.  I know that some of the twists here and there are ones that we, as science fiction fans, would have seen before but Huff always manages to put a new spin on them or portray them in such a way that they feel completely new.

Another one of her strengths is with the worlds that she builds with her writing.  The first three novels in this series all did a great job of sucking the reader in to the world and wanting to see more of it.  This one takes a slightly different tact in that with the worlds fully formed, it gives her more of a chance to explore it as well as the characters reactions.

If you were disappointed with the third installment, I highly recommend that you still go out and pick this one up because it more than makes up for the slight loss in momentum.  If, you have liked the other three in the series then you know exactly what you are going to get here and have probably already grabbed yourself a copy.