The True Lives of the Fabulous Killjoys Review 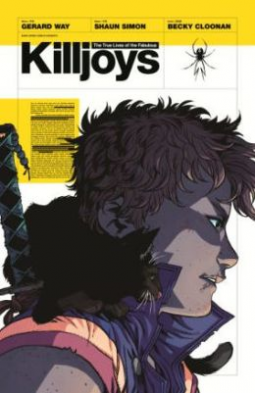 
Years ago, the Killjoys fought against the tyrannical megacorporation Better Living Industries, costing them their lives, save for one — the mysterious Girl.
Today, the followers of the original Killjoys languish in the Desert while BLI systematically strips citizens of their individuality.
As the fight for freedom fades, it's left to the Girl to take up the mantle and bring down the fearsome BLI or else join the mindless ranks of Battery City!
Join Gerard Way and Shaun Simon as they sing the stories of the fabulous Killjoys, the final chapter of the Danger Days saga by My Chemical Romance.


The story of the 'Killjoys' was started back when the back My Chemical Romance, fronted by Gerard Way, released the album 'Danger Days'.  As an album, the story the songs told were quite interesting and had a nice flow to them.   When it was announced that Way would be doing a comic book series based on the album, I must admit that I was very unsure where the story would go and if it would hold up in a new medium.  I've read comic books by musicians before and they tend to be quite hit and miss so where would this one end up?

Well, as much of a cop out as the answer is, it's definitely in the middle.

The art by Becky Cloonan is the highlight for me by far.  I wasn't all that familiar with her work before reading this but now I'll definitely be sure to check some more out.  Her style really made the story jump off the page and hook me in, especially with some of the great panel work on show here.

Story wise, while the story itself was really good, something just felt a little off.  It almost felt as if something was missing and I can't put my finger on why.  Gerard Way and Shaun Simon really do work well as a writing duo and the story they have crafted here is interesting, exciting and really did hook me in for the most part.  It's a little annoying that something just felt missing because that would have raised the quality of this from being really good to being brilliant.

One of the things that I liked the most about the release was that it felt really cinematic in it's scope.  Thanks to the team up of the writing, which had great pacing, and the art by Cloonan, I really could imagine it being a big budget movie up on the cinema screen.  Hell, I'd go watch it.

As a fan of the band themselves, you can definitely see the influences in Way's stories that were so present in the songs that they put out.  The characters are there, the twists and turns are there so their fans are definitely going to be lapping this release up in spades.

All in all, this is a good release from Dark Horse Comics and one that I did really enjoy reading, it just felt like something was missing.  That said, don't let that put you off of picking this graphic novel up because it really is a good story and the art by Cloonan is superb.  Plus if you are already a fan of Gerard Way and / or his band then no doubt you'll be picking this up anyway and so you should.