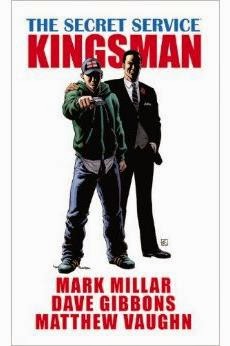 
Kick-Ass writer Mark Millar, Watchmen legend Dave Gibbons, and superstar director Matthew Vaughn team up to reinvent the spy genre for the 21st century in one of the most brilliant new comics of recent years.

A British secret agent feels guilty about never spending time with his deadbeat sister and takes his wayward nephew under his wing after he's arrested in the London Riots.

The boy is heading straight for a jail cell until his uncle steps in and tries to give him a new life, training him up to be a gentleman spy.

Gone are the garish street clothes and chunky jewellery, replaced with a Savile Row suit and bulletproof umbrella as he travels the globe to uncover a conspiracy that links the kidnapping of the world's most famous sci-fi actors with a plot to eradicate 90% of the human race.


The first thing that hit me about this graphic novel that collects the 6 issues of 'The Secret Service: Kingsman' series was by far the line up of people involved.  Matthew Vaughn, Mark Millar and the legendary Dave Gibbons.  Because of a line up like that, this collection had a hell of a lot of expectation on it's shoulders but would it live up to those?

Well, yes it did but would you expect anything less?

I have to admit that I'm not the biggest Mark Millar fan in the world.  There are times when I think he just does things for the sake of making the readers just wonder if he really did just put that on the page but there are also times when I  think he is one of the best writers out there today.

Here, there are a lot of hints towards the 'Wanted' series but where that one was good albeit in a bit of a hit and miss way, this one has a much better flow and pacing to it.  In fact, I would even go so far as to say that this is one of the best bits of writing that Millar has done in his career.  This team up with Matthew Vaughn has crafted a funny and exciting story that not only will have you chuckling at some of the things that happen in the story or something one or more of the characters will come out but then on the very same page having you hooked in and wanting to know what will happen next.  That sort of storytelling has always been one of Millar's greatest strengths and it shows here in spades.

The characters here are superb and you can really get involved in their lives.  One of my favorite characters of the series was by far Jack London.  He comes across as equal parts calm James Bond style spy but also as quite a cynical guy too.  I loved how many layers the character had in the story and really enjoyed the relationship between him and Eggsy.

Art wise, well, it's Dave Gibbons.  You know what you are going to get.  Smooth lines, exciting panel work and some of the most detailed comic book art in the business way.  That's no different here.  Gibbons has a reputation for being one of the best artists in the business and his art here really brings the story to life in a big way.  The action sequences here are utterly brilliant and it's easy to see why there were so many good reviews for the series itself.

Mark Millar has definitely hit his best form here with this release and with the team of Matthew Vaughn and Dave Gibbons, has crafted one of the best series I've read in a very long time.  It had excitement, humor and some fantastic art that will make readers want to revisit this collection many times.  What more could you want as a comic book fan?