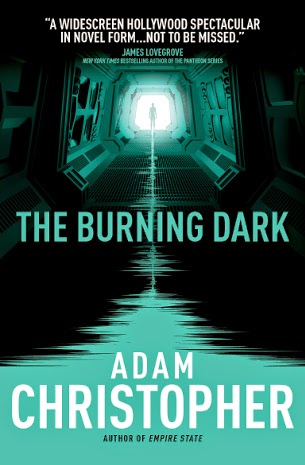 
Captain Abraham Idaho Cleveland has one last mission before early retirement; decommissioning the U-Star Coast City, a semi-deserted research outpost orbiting a toxic star on the edge of Fleetspace.

Arriving to find the station commandant missing, Fleet communications plagued with interference, and a hostile skeleton crew haunted by insidious shadows and disembodied whispers, Ida becomes increasingly isolated and paranoid.  He reaches out to the universe via an old-fashioned space radio, only to tune in to a disturbing signal; a woman's voice that seems to echo across a thousand light-years of space.

Is the transmission just a random burst of static from the past - or a warning of an undying menace that threatens to devour humanity's future?


Lets get one thing out of the way straight away.  I love science fiction of all kind but if you mix it, and mix it well with horror, then I am one happy little nerd.  That's where this one comes in.

As a massive fan of movies such as 'Event Horizion' and 'Sunshine', I know just how effective a horror theme can be when the writing is intelligent and atmospheric.  This novel has that and much more in spades.

'The Burning Dark' by Adam Christopher is an utterly superb piece of writing, not only in the science fiction / horror genre but in literature full stop.  The way Christopher creates such a feel of dread and of claustrophobia that run throughout the entire novel.  That works superbly well with the characters that react in realistic ways.  There are no implausible last stand / action hero type histrionics here.  Instead you get to see the characters make mistakes, see them scared, even see them act cowardly in places too.  That made such a nice change from seeing characters surviving and doing no wrong.

One of the things I liked the most was the fact that while there was so much going on during the story, not once did it feel cluttered or overdone.  Instead it felt a bit like watching a jigsaw being put together.  At first you may see many pieces all at once but then when it's together you end up with a fantastic picture.  You have themes of suspense, politics, dread and so much more.

Another reason that this novel works is that it works as both a stand alone book but also works as part of a series too.  And for that reason, Adam Christopher has most definitely found himself a new fan in me.

If you are a fan of dread and suspense filled science fiction such as 'Event Horizion', 'Sunshine' and other such stories then you will find a hell of a lot to like in this novel.