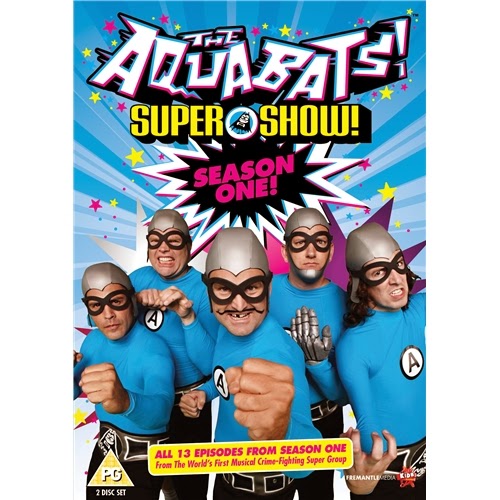 
From the creators of Yo Gabba Gabba! and frontman Christian Jacobs comes the perfect blend of live-action and animation!

Follow the amazingly wild comic antics of The Aquabats the galaxy's first group of musical crime-fighting superheroes! MC Bat Commander, Crash McLarson, Ricky Fitness, Eagle Bones Falconhawk and Jimmy the Robot will take you along on their most outrageous adventures to protect space from the creatures and super villains out to destroy it!

All 13 Season One episodes can now be found in one deluxe collection sure to banish boredom and make anyone an instant fan of the world's most inept superheroes!


While I am a big fan of the bands music itself, I hadn't realised that there was a television series until I stumbled upon it while looking for something different for myself and my son to watch.

The first thing I thought while watching it was the simple fact that the show is so completely bonkers, much like the band itself, that I wondered how on Earth they had manage to convince the television executives to green light such a series.

However, the sheer bonkers nature of the show and the hilarious insanity that comes with it is one of the main strengths of it.  You will honestly just sit back and wonder how they can come up with such crazy and funny stories.  The great thing is that one of the creators of the show itself is the guy who created the equally as weird children's show 'Yo Gabba Gabba', which is another of my sons favorite shows.  You can really see the sense of fun in that series running through this one.  The fact that the lead singer of the band is involved as a creator too really lends itself to the humor as they take their stage persona's to a whole different level here and really ramp them up.

I've seen a few sites describe this as a bright, colorful and very fun mess and I suppose that's a good way to look at it.  It's not serious in the slightest and is so fast paced that there really is no chance for the children to get bored while watching it.  There are also some great moments with fake adverts and some fun little animated moments during the shows too.

The only disappointing thing about this release is that I feel the European fans have been a bit short changed with the set.  The region one release had an absolute plethora of special features, little mini episodes and so much more yet here, the region 2 release just has the episodes and that's it.  Bit of a shame really but it's no more difficult to get the region 1 release so maybe just pick that one up instead.

All in all, and I know I keep saying it, but this show is so insane that it really has to be seen to be believed.  The best way to describe the series is that it's almost as if the 1960's Batman series had a baby with the original Power Rangers series and you're nearly there.  Grab yourself a copy and see what I mean.