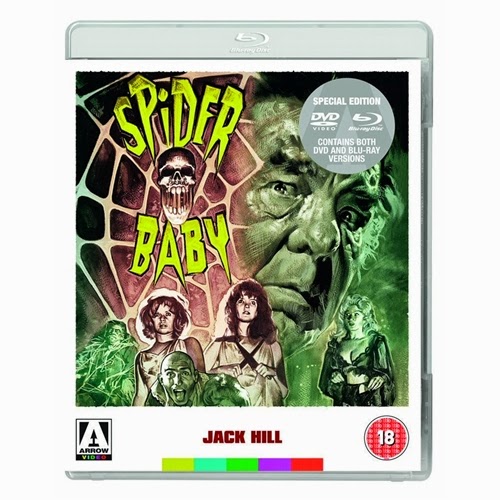 aka The Maddest Story Ever Told


This was the first solo feature by Jack Hill (Coffy, Switchblade Sisters, Foxy Brown), whom Quentin Tarantino dubbed the Howard Hawks of exploitation filmmaking , and it remains one of his wildest and weirdest.

The credits dub this the maddest story ever told , a promise that s well on the way to being fulfilled in the opening scene alone, when Virginia traps and kills a hapless deliveryman in her makeshift web. She s one of three siblings who suffer from a unique genetic disorder that causes them to regress back to childhood, while retaining the physical strength and sexual maturity of adults.

Lon Chaney Jr gave one of his most memorable late performances as Bruno, their guardian and protector, who has managed to cover up their crimes until two distant relatives lay claim to their house. When they insist on moving in, Bruno has to cross his fingers and hope that the children behave towards their new guests...


After reviewing 'Pit Stop' directed by Jack Hill earlier, I had managed to give myself a big of a hankering for watching even more of his films.  When I saw that the awesome Arrow Films had released this as a dual format set, I couldn't wait to get my hands on it.

I hadn't seen this movie for a very long time and I was wondering if the movie would truly be as good as I remember it being.  Well, the simple answer for that is that a resounding yes.

One of the things that I have always loved about this movie is that it manages to be completely bonkers and insane and yet be deliberate and full of atmosphere and gothic grandeur.  They manage to marry the different themes yet without becoming disjointed or confusing.  The sheer amount of subtle moments throughout the movie really add up to make this a gripping take on mental problems.

However good the writing and the themes running through  the movie are, they would be all for nought if the performances weren't up to scratch.  That's not the case here.  There are some fantastic moments in this movie thanks to the cast here.  One of the most memorable ones is by far the absolutely insane yet strangely sympathetic performance by the always brilliant Sid Haig.  Whenever he's on the screen, you honestly take your eyes off of him.

There are so many great moments during the film that I could honestly just sit here for hours and tell you them all without repeating myself yet it's in the feeling of dread and horror that it really excels.  That raises the quality of what could otherwise be just an exploitation more from an era full of them in to being a massively gripping and well made horror movie with multiple layers.

I'd be remiss if I didn't mention the superb performances of Jill Banner and Elizabeth Washburn.  The fact that all these moments are happening while they give very innocent and almost child like portrayals really ramps up the creepy feeling of dread that runs all through the movie.

The special features are an area where Arrow Films normally do really well and that is most definitely the case here.  In fact,  the special features here are some of the best and most informative that I have seen on one of their releases.  It's clearly been a labor of love for the people involved in this release and it shows.

All in all, I would definitely say that this is an essential purchase not only for Jack Hill fans but also for horror fantatics and people that really like the movies they watch to be full of memorable and creepy performances.  This movie definitely has all that and more.  Add in the absolutely superb special features, I really can't recommend this dual format release high enough.