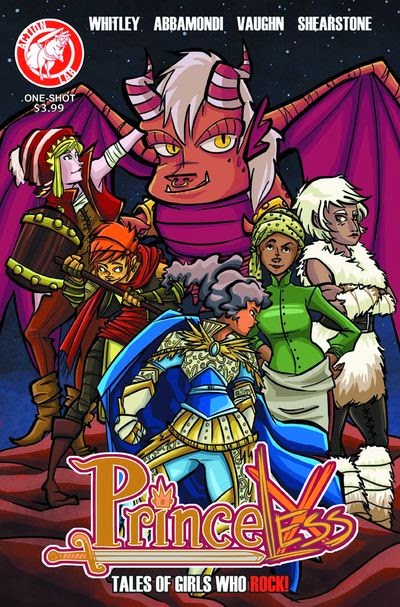 
Princess Adrienne is on the loose again, and this time she brought some friends! While Adrienne may be the first runaway princess, she's certainly not the only girl who rocks!

Come join Adrienne, Bedelia, Sparky, Tempest, and some brand new friends in Princeless: Tales of Girls Who Rock, a one-shot sure to introduce you to your next comics obsession!

I must admit that when I stumbled upon this title in a bargain bin at my local comic book store, I figured I would grab it for my wife as she also has had a soft spot for these sorts of stories.  That's when I figured I would give it a look after looking up some information about the series itself.

This installment is a one shot that has a couple of stories involving those characters and considering that I hadn't heard of them before, I was a little lost as to who was who and what their stories were connected to.  That said, I actually quite enjoyed this one and would definitely check out the series itself to see just where their tales fit with the overall world that this creative team has created.

The stories were all pretty interesting although to a newbie such as myself, maybe a little confusing in places.  That's not a knock on the quality however.  Far from it.  The writing has a great pace, some seemingly interesting characters and has made me want to pick up the rest of the series so you can't really complain about that.

Art wise, there is a very mixed bag of styles here yet they managed to make each story their own all while managing to make it all seem like they're all set in the same universe.  While I wouldn't say that there was any bad art here, I would definitely say that there was one that really stood out for me and that was Angi Shearstone, which was also the strongest story by far in the collection.

All in all, while it's not the best title to pick up if you haven't read the series itself, it still serves as a pretty good introduction to the series and as such, I would say that this one shot was a definite success.