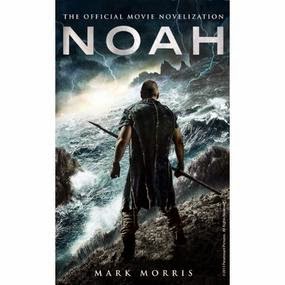 
One man's quest to save mankind.

When he has a vision about a flood sent to destroy all life on Earth, Noah knows what he must do.  Together with his family, he must save two of every living animal.  He must build an ark.

Noah has to evade the many dangers that would see him fail and live the world to ruin, and overcome his own struggles to fulfill his mission.

This is the epic story of one man's attempt to preserve life for a new world.


Now then everybody.  Raise your hand if you have heard of the tale of Noah before.  You know, the guy who built an ark and saved 2 of every animal that he could find.  Everyone?  Good.

Well, this story is based on the movie that seems to be dividing a lot of critics and movie goers.  Some think it is too far removed from the actual Bible version of the tale and other people seem to appreciate it being a different take on a well known legend.

Personally, I haven't seen the movie yet.  For some reason, while the trailer looks exciting in a 'let's destroy the world' kind of way, it just didn't excite me enough to want to shell out my hard earned money to sit in a crowded cinema and eat stale popcorn.

So when the lovely folks at Titan Books sent me over the novel version of the movie, I have to admit that I wasn't all the excited about reading but I thought that I would at least give it a go and read it with an open mind.

The novel itself by Mark Morris is a well paced and exciting read.  Morris does a fairly good job of not making the story concentrate on Noah.  Instead, the surrounding and supporting characters are brought to life here and really adds layers to proceedings.   When the story really gets going, the book is written in such a way that you really get to see the things that all of the characters and not just Noah have to go through just to be able to survive.

While you will disappointed if you are expecting a straight up version of the Bible story, this novel still comes across as a fairly well written and exciting adventure with a fantasy slant.  Worth picking up if you've seen the movie and definitely one that even a casual reader can pick up and be entertained by.