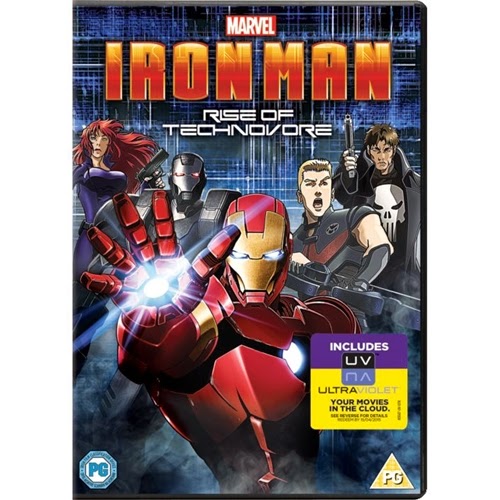 Billionaire Tony Stark, in his Iron Man armour, prevents an attack from a mysterious new foe, but innocent bystanders are killed, including his best friend War Machine, Lt. Colonel James Rhodes. Detained for questioning by S.H.I.E.L.D., Iron Man escapes, determined to find the mastermind behind the attack.

Pursued by Black Widow and Hawkeye, Iron Man enlists the help of the ruthless vigilante The Punisher. But can the Armoured Avenger handle what he finds when he catches the person responsible and is forced to face his deadliest weapon, a biotechnology called Technovore that could wipe out all life on the planet?


As a massive fan of the Iron Man comic books and the character itself, I was quite eager to get to watch this one as it sounded like it was going to be a different take on the popular character.

On paper, the story sounded like it was going to be an action packed, twist filled movie with a ton of cameo appearances that would really round out the Marvel Universe that this story was taking part in.

Well, it's been a long time since I was disappointed in a Marvel movie, the last one being the awful 'Elektra' movie, but this one can now definitely go on to that admittedly short list.

Well, the one thing that this movie has going for it is it's animation.  The movie does look really look absolutely superb, even beautiful in places.  That's especially true in the battle scenes as well.  They do look busy and frantic but they are very well animated.

Other than that, the movie itself fails on quite a few levels.  The story itself is completely out there and in some places so convoluted that it's actually massively hard to even realise who is who and what the Hell is actually going on.  Like most anime movies that I have seen, this one tends to concentrate more on making the characters look great and leaving the rest to feel rushed.  There are exceptions to this rule, especially in the case of 'Akira', but this one really struggles to even be coherent.

Another thing that bugged me is that for a lot of the movie, it didn't really feel all that much like an Iron Man movie or even a Marvel one.  It reminded me so much of the Gundam stories that it felt a lot more like that.

One of the main sticking points for me is that while I wasn't expecting the dialogue to be Oscar Wilde, the dialogue comes across as equal parts nonsensical and pretentious.  There were even a couple of scenes where I actually groaned at some of the things that were coming out of the characters mouths.  I know it's a superhero movie but I really wanted the movie to make the story fly off the screen but it did the exact opposite of that.

Even though this is rated at a PG, I would definitely be very careful about letting the younger superhero fans out there watch this one.  There are actually some quite brutal, for this type of movie, death scenes that while brief did surprise me with how violent they were.  There were also a couple of moments of bad language too so I was actually quite surprised with the rating.

All in all, this is definitely one to miss.  It comes across as a faceless anime with some really bad dialogue and if I'm completely honest, some poor voice work.  The only one that was memorable for me was Norman Reedus as Frank Castle / The Punisher.  He really made the character exciting and memorable.  Considering this is an Iron Man movie, I would have thought they would have made sure that Iron Man was the memorable one but maybe that's just me.

Posted by Pat Scattergood at 13:09