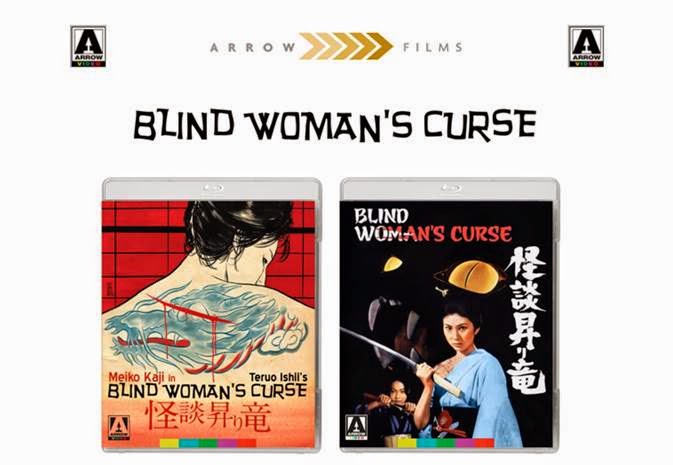 Akemi (Kaji) is a dragon-tattooed leader of the Tachibana yakuza clan. In a duel with a rival gang Akemi slashes the eyes of an opponent and a black cat appears, to lap the blood from the gushing wound. The cat along with the eye-victim go on to pursue Akemi’s gang in revenge, leaving a trail of dead yakuza girls, their dragon-tattoos skinned from their bodies.

A bizarre blend of the female yakuza film and traditional Japanese ghost story, with a strong dash of grotesque-erotica (the same movement was a sensibility of Edogawa Rampo whose works were adapted by Ishii in Horrors of Malformed Men), Blind Woman’s Curse is a delirious mash-up of classic genre tropes, of which Ishii was no stranger, having directed everything from Super Giant films to biker movies!


I love my Japanese movies of all shapes and sizes.  They can be horror, fantasy and pretty much anything in between.  There have been some classics from the land of the Rising Sun, some not so classic but they've always managed to be different from the movies that you will see coming from the Hollywood studios.

This one is most definitely one that is firmly in the different category.

If you are at all familiar with Teruo Ishii, then you know he was no stranger to both gore and the macabre.  This is a man that was at home making biker movies as he was making movies about super giants destroying everything in sight.  That said, Ishii's movies do tend to be the sort that divide critics straight down the middle.  They either see them as masterpieces of the movie world or as movies so messy and messed up that they make little to no sense.

This one falls a little bit in the middle of those ideas.  What we have here really is a movie that doesn't really know what it wants to be so it tries to be a bit of everything.  For most of the movie, that works pretty well but there are certain parts that will definitely leave you scratching your head and wondering what is actually going on.

You can definitely tell from watching this movie where some of Quentin Tarantino's influences have come from because he has adopted and adapted the style shown by Ishii here.  There are moments that are pure lurid colorful scenes that keep your eyes firmly glued to the screen itself.  For all the bizarre moments in the movie there is a real sense of the macabre that runs throughout the movie.

The two parts that stood out the most to me while watching this rather strange movie were the scenes in the grotesque night carnival as well as the flesh carrying, blood drinking cat.

All in all, this most definitely won't be to everyone's tastes.  It's almost as if someone put lots of different Japanese movies in a blender and this was the gory result.  It does work for the most part and I personally enjoyed it.  I was a little bit disappointed with the lack of special features but the booklet that comes with this set is very well set out and has a fair bit of information for Ishii's fans out there.

Posted by Pat Scattergood at 08:44