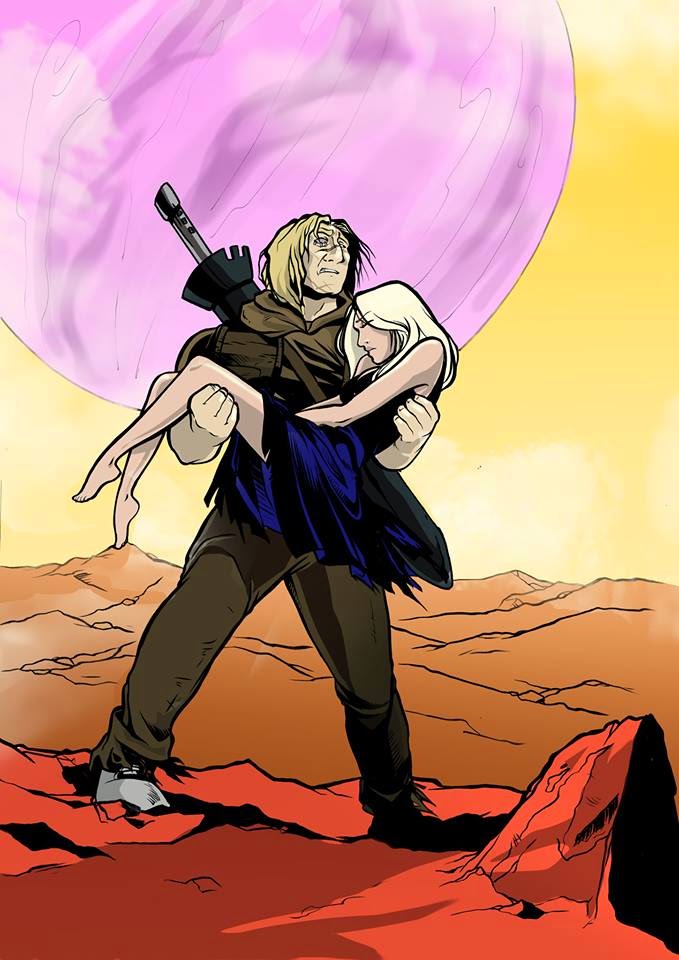 
This issue follows the story of Bartlett, a wanderer who collects and sells technological scrap on the barren world of Valley-01.

Traces of the mysterious planet Charris, which looms overhead in the sky, give hints towards the coming conflict.


The premiere issue of 'Valley 01' is a bit of a strange one to review if I'm totally honest because it fits in to so many genres and styles, especially with the writing.

Story wise it has a bit of a fantasy feel with a bit of dystopian science fiction  and action mixed in as well but there is also a feeling of humor the runs just under the surface as well.  That really comes across in the form of the characters.  You have a fairy type character who may or not exist only in the main characters mind, you have a fight with a massive bull type creature and much more.  The writing really makes me want to see what other kind of creatures and characters are going to turn up next.

The story itself doesn't really tell us all that much if I'm honest.  It felt a bit like it was whetting our appetite for what was going to be coming next and it does that very well indeed.  I loved the brave move of having the first few pages with next to no dialogue or words.  It rested completely on the art and facial expressions of Bartlett himself.  That was punctuated by a battle with a creature known as a Wyvern so personally, I'm looking forward to seeing more of him and his rather cynical nature.

The art does a superb job of putting forward a dirty, dusty world that is full of strange creatures and locations.  The art came in to it's own in the beginning scenes that I mentioned earlier that rested solely on the art itself.  I have to admit that I hadn't heard of Zaramella before I read 'Valley 01' but I would be very interested in seeing in how her art develops in the future issues.

All in all, I'm definitely interested in seeing where this tale is going to go next.  There are some interesting characters here and the ending has made me want to know how the addition of the female character near the end is going to affect Bartlett's life.  The various themes that are running through the story make me think that this isn't going to be a stereotypical story so bring on issue 2!