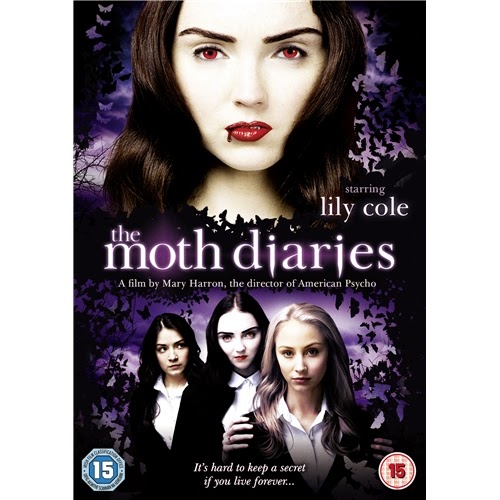 Based on
'The Moth Diaries' by Rachel Klein

Written and Directed By
Mary Harron


Led by British talent Lily Cole (Snow White and the Huntsman, The Imaginarium of Doctor Parnassus), Moth Diaries is a modern gothic coming of age story set in a world of obsessive teenage girl friendship. Rebecca (SARAH BOLGER), a young girl haunted by her father's suicide, begins a new year at an elite girls' boarding school. Before long, Rebecca's close friendship with the popular Lucy (SARAH GADON) is tested by the arrival of the dark and mysterious Ernessa (LILY COLE). Lucy quickly falls under the glamorous Ernessa's spell and becomes emotionally and physically consumed by their intense friendship.

Hurt and confused, Rebecca develops a crush on her English teacher, Mr. Davies (SCOTT SPEEDMAN), who is teaching a class in Gothic fiction. As she immerses herself in their assigned reading, the vampire novel Carmilla, Rebecca becomes convinced that Ernessa is a vampire. Mysterious deaths begin to occur and Rebecca is convinced Ernessa is to blame, but when her warnings are dismissed as the result of obsessive jealousy she decides that she must take drastic action to save herself and those around her.


I must admit that I wasn't all that sure what to expect when I stuck this in to watch.  The cover made it look like it was going to be another one of those badly written 'Twilight' style movies full of cliches and wooden acting.

However, when the movie started, I soon came to the conclusion that this was going to be nothing like 'Twilight' or 'Warm Bodies'.

There's a grand Gothic feeling running through out the movie and that really helps to raise it above some of the other offerings in the genre.  As a visual director, Mary Harron, has done a majorly stand up job.  If anything, the movie itself looks gorgeous.  The settings are used almost as if they are a character themselves.

However, being Mary Harron, known best for 'American Psycho' and 'The Notorious Bettie Page', is also a downside for the movie.  After finding that she was involved, my hopes for the movie were raised but after sitting through the movie, I have to admit that I came away feeling a bit disappointed.

Firstly, the script and story itself feels incredibly choppy and some of the transitions between scenes wind up feeling a bit like filler or even as redundant.  The movie is based on a book that was written in diary entries  but Harron decided to film these as asides for the character and it just doesn't work all that well.  In fact, I would even go so far as to say that they sometimes felt like they were from a completely different movie and that led to the movie feeling quite disjointed in places.

The dialogue comes across as inane and even completely flat and uninspired.  There were quite a few scenes  where I wanted to tell the characters on the screen to 'just get on with it' so that the plot could finally move on a bit faster.  It's the same with the performances.  A lot of the cast just seem completely uninterested in what they are doing.  There are even scenes that come across as if they are reading from cue cards or something along those lines.  One of the worst of these is Scott Speedman, who and I'm being brutally honest here, was awful.

That said, there was one shining moment in the movie and that was the amazing performance by Lily Cole.  She really came across as charming and sweet in some scenes, mysterious and brooding in others without the performance feeling forced or over the top at all.

Considering who was involved, I was hoping for a much better movie than the one we ended up getting.  Other than the performance of Lily Cole, who was absolutely fantastic, this is a movie that is the definition of style over substance.  Yes it looks gorgeous but the stilted dialogue, bad editing and lack of an interesting ending really make this one in to a movie that is really not worth the time spent watching it.  That's a real shame because the supernatural mystery element really seemed interesting but the execution of it all left this vampire movie without a bite to it.

Posted by Pat Scattergood at 17:00