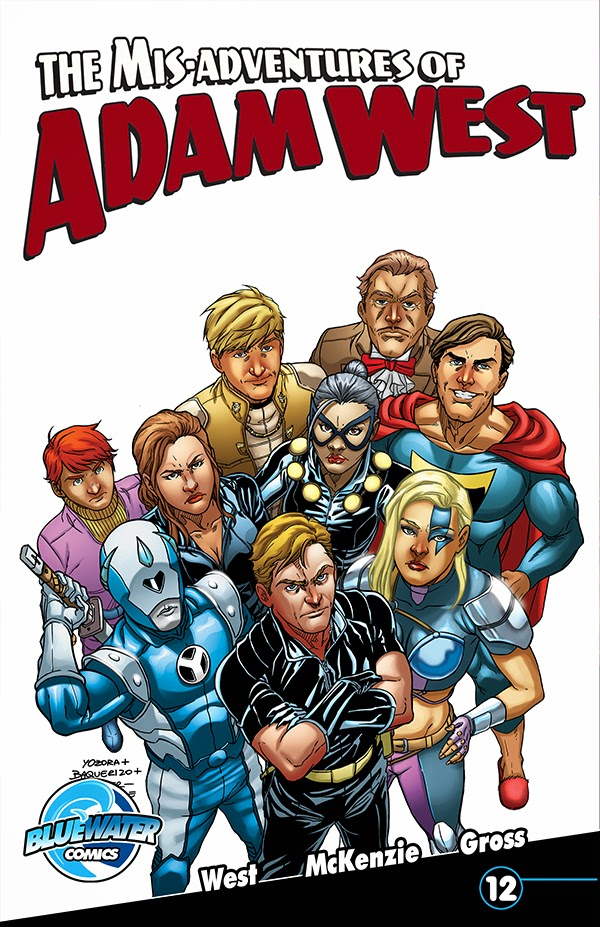 The powerful fictional vampire named T'damas-U stands revealed. Adam has an army with him.

Will it be enough as the entire multiverse hangs in the balance!


As a big fan of the 1960's Batman and of Adam West in general, I started following this series and was really entertained by the 'Quantum Leap' style stories.  Then the tone changed and it went full on in to action territory and was really exciting.

When they said that this, the 12th issue, was going to be the final issue it was a bit sad in a way because I was really enjoying the stories that these guys were putting out.  I also felt like there was going to be a big blow out ending to go out with a bang.

After reading this one, I have to admit that I was a little disappointed in places.  Don't get me wrong, it wasn't bad at all.  In fact, I enjoyed the issue.  It's just that it felt like it was missing something, especially in the final third.

In this issue, the loose ends are mostly tied up, we get to see some more of why West is calling forth all the people from his past like Vincent Price, Eartha Kitt and many more and we get to see the final battle as well.  Yet as exciting as it is, something  just felt a little bit off.  I loved the ending yet at the same time, it seemed to come out of nowhere.  The battle was getting more and more hectic, more and more information was being thrown at the reader and then bam, it was over.  Don't get me wrong, it was a nice heart felt ending, it just felt like it came out of left field so to speak.

Art wise, this issue had the same problem in that while the art wasn't fantastic, it wasn't bad either.  There were a couple of panels where the art felt like it could have done with being a little less hectic and a little more detailed but that's just my opinion on that one.  For the most part, this issue is a good one to end on for 'The Misadventures of Adam West' but, as a fan of the series, I suppose I just wanted it to go out with a little bit more of a bang than it did.

This one is definitely a title worth picking up if you want to see a fun and exciting read that will always give you a couple of laughs and also if you are a fan of the series then you will want to pick this one up.  However, if you haven't read any of the other issues then you're going to feel quite out of the loop by the story itself.