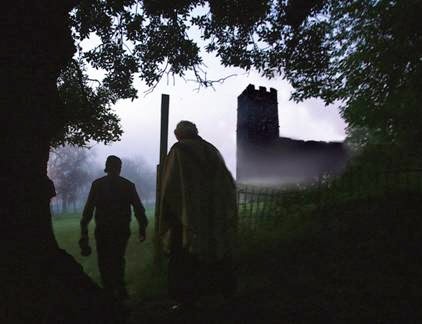 Written and Directed By
Elliot Goldner


Elliot Goldner directs this British horror following a team of specialists from the Vatican who are drawn to a remote West Country church by reports of mysterious occurrences in the area. Though Father Crellick (Luke Neal) has video footage of items apparently being moved around inside the church by supernatural forces, Deacon (Gordon Kennedy) and Father Mark Amidon (Aidan McArdle) are sceptics by nature and want more conclusive evidence.

They duly set up more cameras inside the ancient building, but are the scratching noises coming from inside the walls a source of greater concern?


I've never been that big a fan of the found footage genre in general.  Granted there have been some good ones such as 'The Blair Witch Project' and 'Troll Hunter' but for the most part, they've all been rather samey and, in the case of a few I've seen recently, even boring.

When I saw that despite this one having an interesting premise, it was still a found footage one, I lowered my expectations a bit.

The thing that made me decide to sit down and give it a go was the simple fact that it managed to sound a bit different from the normal found footage dross that's out  there.  I was interested in the simple fact that they would be combining religion with the found footage horror and wondered just how they would manage to marry the two without it seeming completely unbelievable.

Well, for the most part they managed it extremely well.  In fact, I would even go so far as to actually say that this one would be up there with some of the good to really good ones in the genre.

There were some moments that really get under the skin of the viewer without feeling a bit silly and over the top.  Granted, there were a couple of scenes where they resorted to jump scares but for the most part, they stuck to using the solid acting, well paced writing and creepy atmosphere to create the scares.

Talking of the acting, my word I've seen some truly awful performances in this genre but here, the cast are solid to good in their roles.  I can honestly say that they really nailed their characters and each one was memorable, even the minor ones.  By playing their characters so down to Earth, they really made what happens in the movie seem completely believable and subtle.  That really adds an edge to the movie and that's why it has a superbly creepy feel to it.

As for the end result, I really did enjoy this one, which considering it's a found footage movie came as quite a surprise to me.  In fact, I would even watch it again.  That's down to the multiple layers that the intelligent writing gives us viewers something to really sink our teeth in to and as a horror fan, is there anything else we could ask for?