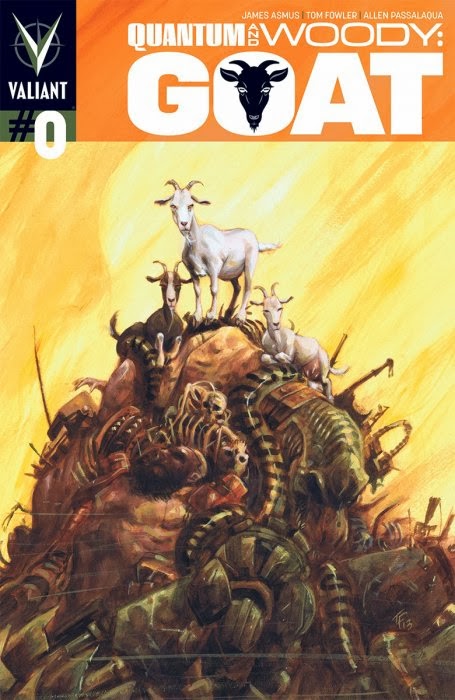 
Are heroes born...or are they bred? Tom Fowler returns to QUANTUM AND WOODY for the thrilling and tragic life story of...Vincent Van Goat! Behold!

A hero is born! A hero rises! We're gonna level with you-you're going to need to read this issue! Excitement and laughs and all that!

Major repercussions for Quantum and Woody! Yes, seriously! Buy the issue and then see if we weren't kidding!


As someone who finds the 'Quantum and Woody' stories fun but a little hit and miss, I was still intrigued by the idea of having an origin story for everyone's favorite goat in the series, Vincent Van Goat.

Yes you read that right.  This is a comic book about a goat.  I'll let that sink in for a bit.

Ready?  Good, now I shall begin.

The 'Quantum and Woody' stories, like I said earlier, can sometimes be a little bit hit and miss but are nearly always at least fun for the most part.  The fun part is most definitely in action here but at the same time, they've crafted an exciting and fast paced story that will thrill fans of the series.

A lot of critics have said that this one shot is the perfect stepping on point for new fans and I have to admit that is a great point.  I've seen a couple of issues here and there so I'm not super up to date with the story lines but I was able to follow the story all the way through while wanting to read more, especially with the twist ending that ends this issue.

For the most part, this is a fun, exciting and well paced comic book.  There are some hilarious moments that had me in absolute hysterics.  It's been a long time since I laughed that much at a story and for that reason, I'd definitely say it was worth picking up.

Art wise, it reminded me a little bit of an animated action comedy in that the flow of the issue worked so well that I could honestly picture it on the television.  I loved that kind of flow and art because of the fact that the great panel work and placing made it jump off the page.

All in all, I would say that this is a good stepping on point for new fans as well as rewarding the long time fans as well.  Combine that with the great looking art, hilarious moments and a great twist at the end definitely make this worth at least a look.

Plus it's a comic book about a goat.  What more could you want?