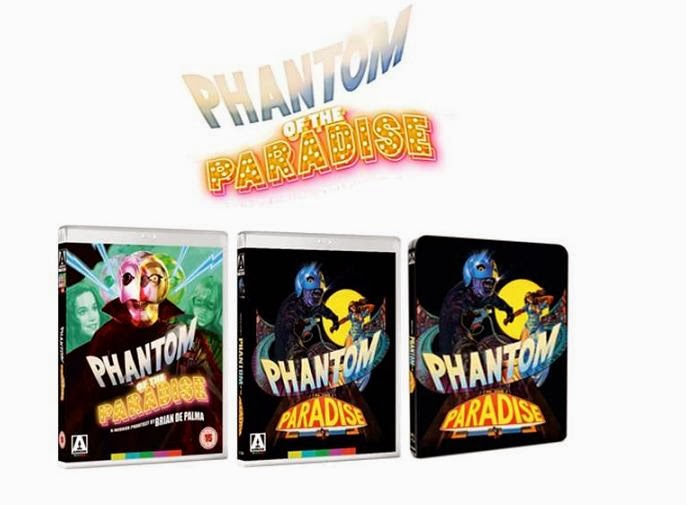 
Brian De Palma’s inspired rock ’n’ roll fusion of Faust, The Phantom of the Opera and The Picture of Dorian Gray boasts an Oscar-nominated score by Paul Williams, who also stars as an evil record producer who not only steals the work of composer/performer Winslow Leach (William Finley) but gets him locked up in Sing Sing - and that’s not the worst that happens to him along the way.

Few revenge scenarios have ever been so amply justified, but the film is also constantly aware of the satirical possibilities offered by the 1970s music industry, exemplified by Gerrit Graham’s hilariously camp glam-rock star. Jessica Harper (Suspiria) appears in her first major role as the naïve but ambitious singer, on whom Winslow secretly dotes.

Prodigiously inventive both musically and visually, this is one of De Palma’s most entertaining romps, not least because it was so clearly a labour of love.


The term 'cult movie' is thrown around a hell of a lot these and most of the them, I would say that it doesn't even apply to some of the movies they use it on.  Here, that term most definitely applies and it does with a steady, satirical charm that I haven't seen in a movie for a long time.

Brian De Palma is a writer and director that divides critics straight down the middle.  You either think he is utterly brilliant or you think his movies are awful.  I don't really subscribe to that notion in that I don't think he is as bad as people make his movies out to be but at the same time, I think that he is massively a hit and miss person.  For every brilliant movie he has made, there are a couple that are awful.  I suppose that you can say that about most writers or directors really..

Here De Palma puts a rather unique spin on the 'Phantom of the Opera' style revenge story.  Here, in all it's camp and flashy glory, is a quite simple revenge tale but one with the definite De Palma touch.  The humor contained here is incredibly self aware and satirical in places and slapstick in others, yet somehow it all gels nicely together and we end up with a very kitsch but enjoyable movie.

For me as a viewer, the biggest plus for me with this movie was the performance by William Finley, who really gives a memorable, if slightly over the top performance as Winslow and The Phantom.   I couldn't take my eyes off him when he was on screen because he seemed to truly be having the time of his life making this movie and it really shows.

The rest of the cast are a little hit and miss in that there are some great performances and some absolutely wooden like a forest yet that all adds to the charm and fun of the movie itself.

Talking of the movie, it mixes so many different genres that there really felt like there was a bit of something for everyone watching.  There was humor, horror, even a bit of kitsch in there for the retro movie fans and there were some of the trademarks that  De Palma is known for.  I wouldn't agree with some of the critics saying that this makes 'The Rocky Horror Picture Show' look normal but at the same time, if you like that time then there's a fair chance that you will like this one too.

Once again, Arrow Films have filled the release with so many special features that I am surprised that the disc didn't burst.  There are so many special features in fact that as a movie nerd, I had major trouble trying to decide which to watch first.  I settled on the feature that has Guillermo Del Toro interviewing Paul Williams.  At 72 minutes, it may seem a bit of a long interview but every single inch of the history and the behind the scenes stuff about the movie are covered.  Or at least, that's what I thought until I saw the feature called 'Paradise Regained', a 50 minute documentary covering the making of side of things.  You'd think that with two things of such long length that there would be a lot of repeating information but that's really not the case here.

All in all, if I'm completely honest, the movie may be a little hit and miss but it's well deserving of it's reputation as a cult classic.  It most definitely ticks all the boxes on that front and I really enjoyed it.  However, it's, once again, the special features that shine out the most.  Just when I think releases by Arrow Films could get any better, they outdo themselves again.  There really is an absolute bounty of special features that will really interest the fans out there and even show them things that they wouldn't have known, even if they are hardcore fans.  The interview with Guillermo Del Toro is an absolute treat and if I'm honest, well worth getting the Blu-ray for alone.