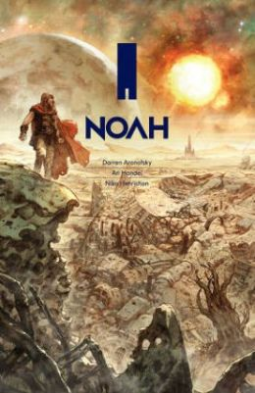 
From acclaimed filmmaker Darren Aronofsky (Black Swan, The Wrestler) and artist Niko
Henrichon (Pride of Bagdad), Noah is a fresh take on the biblical epic for the 21st Century.

A fantastical world is about to be destroyed and one man is chosen to start a new one.

As wicked forces try to take his Ark, Noah must hold his family together while they watch the annihilation of all they know.

Intermixing fantasy and sci-fi with Genesis, Noah both reinvents the elements of the Flood story everyone knows and simultaneously takes the reader beyond them and into the unexpected.


With the movie 'Noah' dividing the movie going public, I was actually quite eager to read the graphic novel version to see if their vision of the story would flow.

After reading this one, I have to admit that while the story itself was interesting in their portrayal of the well known biblical story, I came away feeling a little disappointed with the end result especially considering the names involved.

There wasn't anything largely wrong with the graphic novel itself, it just felt like something was missing from it all.  The way that they portray Noah as a deeply flawed person instead of casting him as perfect and flawless is a great move and to me, it made the story a lot more character driven than it could have been.  There are still some superb set pieces, especially during the actual flood scenes themselves, that really make those parts of the story gripping for the reader but at the end, it just came across as something was missing.

Art wise, I was very excited to see what this was going to look like considering the man involved illustrated one of my favorite graphic novels in the shape of 'The Pride of Baghdad' and this is apparently his first major work since that utterly superb graphic novel.  The problem that plagued the writing are the same ones that plague the art work too.  As beautiful as the story looks, and there really is some brilliant panel work here, some of the  details that Henrichon is known for seem to be missing.  This is especially true when there are loads of people on the page because they seem to merge in to one incoherent mess in places.

While I was a little disappointed with the end result of this graphic novel, there are some very good high spots that make this one still worth checking out but not essential.