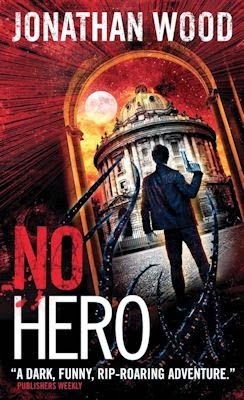 
What would Kurt Russell do?

Oxford police detective  Arthur Wallace asks himself that question a lot.  Because Arthur is no hero.  While he's a good cop, he prefers his action on the big screen.

But when he sees tentacles sprouting from the next of a fresh corpse, the secretive government agency MI37 come to recruit Arthur in its struggle against horrors from another dimension known as the progeny.

But Arthur is NO HERO!

Can an everyman stand against sanity-ripping cosmic horrors?


When I read some of the reviews of this book, they seem to have divided each other with either loving the book or absolutely hating it.  Because of that simple fact, I wasn't really all that sure what to expect when I picked this one up to read.

The synopsis and the general theme of the book sounded really interesting.  A kind of Lovecraft meets Edgar Wright style story.  That intrigued me enough to want to give it a go despite the bad reviews being extremely brutal in their dislike of the book.

I must admit that while I can understand a few of their gripes, this book is actually good, enjoyable and well paced and here's why.

For a of a book worm such as myself, there are quite a few things here that I enjoyed.  In fact, 'No Hero' is pretty much a story of an everyman who struggles with life in general let alone life with added creatures and magic involved.  That to me was an interesting taking on the character.  Some of the complaints are correct in that he can sometimes come across as a bit of a wet blanket but that's kind of the point.  He is a coward, he is  someone who is in way over his head.  I loved that about him.  He's not going to be an effective, bad ass hero.  Instead he's a guy that rushes in without thinking, he makes mistakes.  It makes him human.

Another thing that I liked was the lashings of good old fashioned British humor.  That may be a little lost on certain readers but there really is a dry, British cynicism that goes through the entire book.  That to me felt fresh and new when compared to other such books in the same genre.

There were quite a few really well written and memorable characters and that really makes them come to life in a great way.  I would even go so far as to say that the writing makes it feel like a Edgar Wright movie in how the scenes all knit together.

One of the things that did start to get a little bit annoying was the complaining by the character.  By the end of the book, the constant doubting of the character made it a little bit hard to side with him a couple of times.  I just wanted to tell him to get on with it on two moments.  I did like that a couple of characters picked up on it too in that they even told him to 'man up' in no uncertain terms.

All in all, I can see why the book would divide some readers in to the 'loved it' and 'hated it' camps because it definitely isn't for everybody but I really enjoyed it and would check out more work by Jonathan Wood.