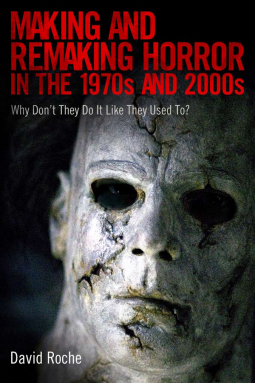 Published By
University Press of Mississippi

In Making and Remaking Horror in the 1970s and 2000s author David Roche takes up the assumption shared by many fans and scholars that original horror movies are more “disturbing,” and thus better than the remakes. He assesses the qualities of movies, old and recast, according to criteria that include subtext, originality, and cohesion.

With a methodology that combines a formalist and cultural studies approach, Roche sifts aspects of the American horror movie that have been widely addressed (class, the patriarchal family, gender, the opposition between terror and horror) and those that have been somewhat neglected (race, the Gothic, style, and verisimilitude).

Containing seventy-eight black and white illustrations, the book is grounded in a close comparative analysis of the politics and aesthetics of four of the most significant independent American horror movies of the 1970s—The Texas Chain Saw Massacre; The Hills Have Eyes; Dawn of the Dead; and Halloween—and their twenty-first century remakes.

To what extent can the politics of these films be described as “disturbing” insomuch as they promote subversive subtexts that undermine essentialist perspectives? Do the politics of the film lie on the surface or are they wedded to the film’s aesthetics?

Early in the book, Roche explores historical contexts, aspects of identity (race, ethnicity, and class), and the structuring role played by the motif of the American nuclear family. He then asks to what extent these films disrupt genre expectations and attempt to provoke emotions of dread, terror, and horror through their representations of the monstrous and the formal strategies employed?

In this inquiry, he examines definitions of the genre and its metafictional nature. Roche ends with a meditation on the extent to which the technical limitations of the horror films of the 1970s actually contribute to this “disturbing” quality. Moving far beyond the genre itself, Making and Remaking Horror studies the redux as a form of adaptation and enables a more complete discussion of the evolution of horror in contemporary American cinema.


If you go in to this expecting a fun and fast paced look at horror movies then in all honesty you are going to be a bit disappointed.

However, if you go in to this book thinking that you are going to get an indepth look at the world of 1970's horror and their 2000's counterparts, then you are definitely going to love taking a look at this book by David Roche.

Considering that this is a release from a university, you kind of know what to expect.  It's going to be an investigation in to the many varied differences between the original movies and their remade versions.  There are so many different things to take in to consideration when comparing the two versions that there is an absolute plethora of information here for the horror fans, especially those who idolise the genre.

Some of the stories behind the movies here and how they still hold up today are very interesting and as a horror fan myself, I found some of the things here to be really informative.

It's true that this isn't a light read or a book that you can just pick up and read from cover to cover but that said, this is definitely a book that the hardcore horror fanatics out will get a kick out of.  It's well written, informative and incredibly well researched.

If you are a big horror fan or know one, then this one is well worth picking up.

Email ThisBlogThis!Share to TwitterShare to FacebookShare to Pinterest
Labels: Book, David Roche, Horror, Making and Remaking Horror in the 1970's and 2000's, Movie Making, Review, Why Don't They Do It Like They Used To?