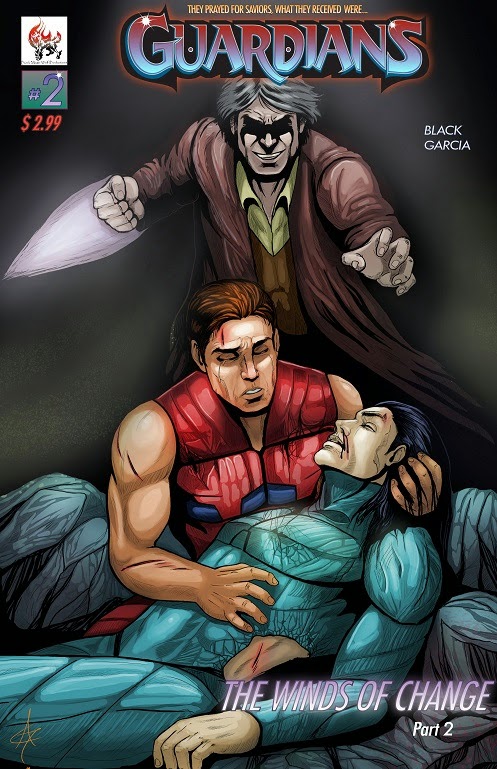 
The people of Delta City cried out for help and the Guardians were created.  And in their short time in Delta, they protected the people without fail.

But all that changed when a new villain named Tempest arrived.  Wielding the power of the wind, Tempest beat the Guardians almost effortlessly, then when Chaos ticked him off, Tempest decided to take things to the next level.

He blasted Chaos through a statue and buried him under the rubble...


After the really enjoyable issue one of 'Guardians', I had massive hopes for issue two.  The fast pacing and the dynamic between the two heroes made it in to a good read.

I have to admit that the momentum definitely is kept going here and we got to see a lot more of Tempest as well, which after an impressive debut in issue one was a great moment.

We have some more of battles but here Chaos has been taken out of the picture for the first part of the issue, which leads us to seeing some more of his partner.  In fact, we get to see him take a little more of a gung ho attitude in a confrontation with Tempest himself.  I loved that little bit of a more reckless feeling to the character because it showed that he wasn't infallible.

The further this story progresses, the more of an evil s.o.b. Tempest is becoming and there doesn't seem to be any stopping him.  That makes a nice change from reading superhero stories where there is no doubt that the 'good guys' will win.  Here, the writing by Todd Black is actually leading us in to feeling like the Guardians are completely screwed despite their obvious bravery.

Art wise, they have kept to the same style as issue one and I really still like the fact that it reminds me of the 90's superhero cartoons that I watched growing up.  There are tons of scenes here to keep the action fans happy and we get to see, like I said before, more of the powers that the characters behold as well.

The only parts of the issue I didn't like was near the end where they tell the reader the name of the character involved in the ending.  However, despite the hokey name, I loved the reaction of the character Chaos.  Watch his reaction and facial expression in those panels and you'll see why he is quickly becoming one of my favorite characters in this series by far.  I also felt the pacing was slightly off as well but I couldn't place my finger on why.

All in all, I did enjoy issue one slightly more than issue two but we get some fantastic revelations, some character development and also, we get a character panel involving Chaos where his facial expressions really summed up the character perfectly thanks to the writing between Todd Black and the art of Alex Garcia.