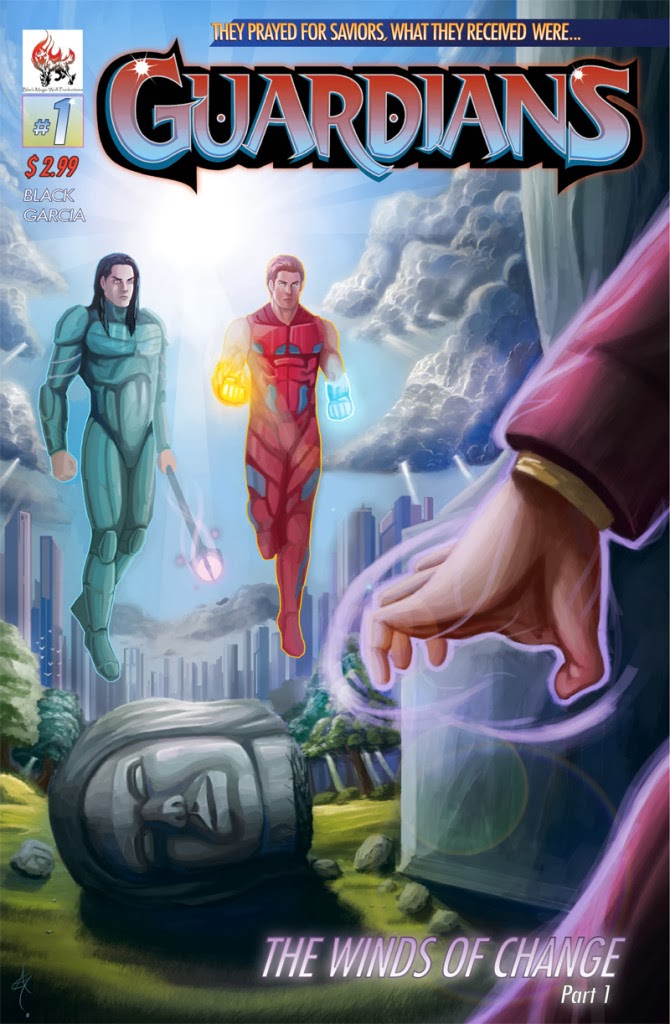 
The Guardians have arrived!

Unfortunately so has their first super villain!

Who is he?  What does he want?

Do the Guardians have the power to take him down?

The "Winds of Change" begin here!


After reading the free copy of issue 0 of 'Guardians', I have to admit that I was eager to see where this new comic team was going to go next.  In fact, that issue was a good starting point and revealed a little bit about the characters.

Here that trend is continued with aplomb and a lot more is revealed here in a big way.

As a reader, we are shown a lot more of the personalities of the Guardians themselves.  That's where this title really excelled for me.  The two are as different as night and day.  In fact, they came across as a bit like Superman and Batman in a way.  You have one that wants to be respected for doing the right thing, maybe even loved for it.  Then you have another that  comes in, kicks ass then leaves without feeling  the need to hear the cheers of the crowd.

I loved that about the characters.  It really gave the characters a different perspective on the superhero genre and that helped make the impact of the emergence of the first super villain in this series by the name of Tempest a massive one.

Here, the ending really slams in to the reader.  You go in to the battle thinking, like in most superhero stories, that they would team up and bam, that would be the end of that super villain.  That's not the case here.  If anything, it made me majorly eager to see just what was going to happen next.

Art wise, Garcia has done a good job of making the issue look exciting and it gave me echoes of the early to mid 90's superhero cartoons that I used to watch growing up.  For me, it made a nice change from the releases that we get today where everything has to be as realistic as possible.

All in all, this is a great start to the series and I will definitely be picking up the second issue.