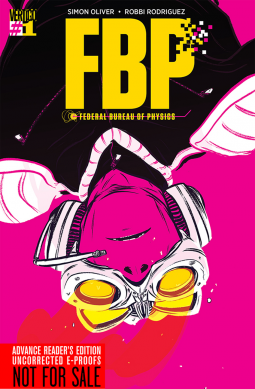 
Wormholes in your kitchen. Gravity failures at school. Quantum tornadoes tearing through the midwest. As with all natural disasters, people do what they always do: They adapt and survive. And if things get really bad, the Federal Bureau of Physics (FBP) is only a call away.

FBP: Federal Bureau of Physics is the story of Adam Hardy: Young, brash and smart, he's a rising star at the FBP, but when a gravity failure leads to the creation of an alternate dimension known as a "BubbleVerse," Adam is sent on a rescue mission and finds his skills and abilities pushed to their limits when he discovers his partner has a different agenda…


When I picked up this title to review, I have to admit that I had heard next to nothing about the release itself.  I knew of the people involved and knew some of their previous work but for me, this one had slipped under the radar.

However, one thing really drew me into taking a look at the title was the absolutely stunning and rather unique cover art by Nathan Fox.  It's one of the most eye catching that I have seen in a very long time and from what I've seen, the rest of the covers in the series are just as amazing, if not better.

Story wise, there is a hell of a lot here for fans of comics like 'Hellboy' or television series like 'Fringe'.  The  collection comes across as loads of stories running alongside one another but not once does it feel disjointed or confusing.  You just know something big is coming and the writing really does a superb job of tying all of that together in an exciting and fast paced way without losing any of the character work.

The idea that the law of physics are basically failing is a very interesting one.  They don't really go in to very much detail as to why all of this is happening but maybe that will be explained a little more in future issues.

While the writing is massively strong, I was a little disappointed with the art inside the collection.  I think that was made more noticeable by just how brilliant the cover art was.  There were a few panels where some of the art looked absolutely spot on but there are also some panels and even pages where it just looked a little bit messy and rushed.  That's a bit of a shame because it does impact on the story itself due to feeling a bit distracting.

All in all, this is a collection that is really worth picking up.  I can't wait to see just where the team are going to take the title next.  It's a bit of a shame that the art seemed so hit and miss because it did get a little bit distracting at times.  Other than that, the cover art and the story itself make this first volume one that's a good title to add to your pull list.